Five different options to replace the Heide Trask Drawbridge in Wrightsville Beach are being considered by NCDOT.

WRIGHTSVILLE BEACH — Improvements (and possible replacements) to the Heide Trask Drawbridge heading into Wrightsville Beach have been a common request from people all around the area — from town leaders to the Wilmington Metro Area Planning Organization (WMPO).

Despite not being in any official local plans, the North Carolina Department of Transportation (NCDOT) is looking into the feasibility of completing a bridge project, replacing the sole entrance into Wrightsville Beach.

A draft feasibility study has been submitted to the WMPO and other local governmental entities by NCDOT citing several reasons for the need to replace the structure.

Current local plans do not specifically mention replacing the drawbridge, known officially as Drawbridge 12, but there are several mentions of improving bicycle and pedestrian access to the bridge — but there’s a catch.

According to the draft, “Improvements to the current bridge structure are not possible given its load bearing ability is at full capacity and cannot accommodate additional weight on the structure (i.e. steel plates over the grated bridge deck).”

But it’s not just bikes and pedestrians that would benefit from the replacement of the bridge, according to the draft, the bridge (and surrounding area) see a significantly higher number of car accidents.

“The Wrightsville Beach Community Transportation Plan, adopted in February 2013, notes that most vehicular crashes occur on or near Drawbridge No. 12 and around the intersection of US 74 (Salisbury Street) and US 76 (Causeway Drive),” according to the draft.

Despite the concerns surrounding the bridge, the NCDOT reports the current bridge has about 23-years of life left in it — provided upkeep is performed.

“Drawbridge No. 12 carries US 74 / US 76 over the Intracoastal Waterway between Wilmington and Wrightsville Beach. Based on the 2015 and 2017 Bridge Inspection Reports respectively, Drawbridge No. 12 has a sufficiency rating of 39.92 and an estimated remaining life of 23 years; however, this is only after numerous major rehabilitation projects. The average annual maintenance costs over the last three years for Drawbridge No. 12 total $234,102.51,” according to the draft.

And that number does not even include rehabilitation costs — just maintenance.

So what is the cost of a rehabilitation project? Well in 2014, the last major rehab project on the bridge cost $9 million.

“The most recent major rehabilitation project, in 2014, cost approximately $9 million and consisted of a metal grid deck replacement, latex modified concrete overlay on the approaching spans, replacement of the steel cross bracing, painting of the metal structure, substructure concrete repairs, a full remodel of the bridge tender house, and an update to the electrical systems that control the operation of the bascule spans,” according to the draft.

While expensive, projects of this magnitude are only expected every 10-15 years.

Wrightsville Beach only has one way on and off of the island which limits construction plans.

According to the draft, “Access to business and residences should be maintained at all points during construction. Any construction restrictions including requests for nighttime work, off-season work, and noise or environmental considerations, will have a direct impact on the schedule and duration of the project. Since Drawbridge No. 12 serves as the only access to the island, a detour that provides access to Wrightsville Beach is not possible.”

Since there is only one way on and off, a new bridge would have to be constructed elsewhere, north or south of the current bridge.

That would be phase one, phase two would consist of routing traffic onto the new bridge and then decommissioning the current bridge.

Building a bridge is not a cheap endeavor and despite the seemingly high costs to rehabilitate the current bridge, $9 million is only a fraction of what some of the proposed costs are for the project.

Projected costs begin right around $70 million and top out at more than $120 million.

There are multiple different concepts for construction, some of which include a highrise bridge, while others maintain a drawbridge.

A public meeting will be held on May 21 at the Wrightsville Beach Recreation Center starting at 4:30 p.m. until 7 p.m.

(Below are initial plans for all five concepts, click each photo for enlarged images) 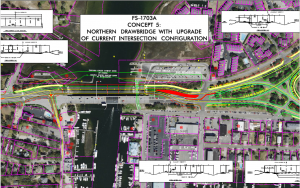 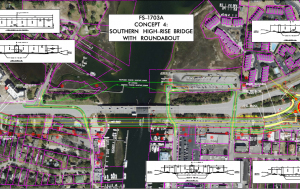 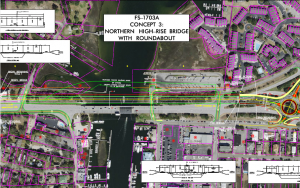 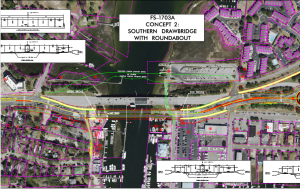 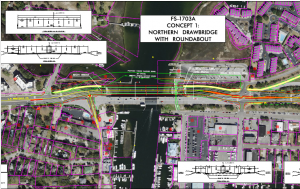