Carolina Beach man has car towed from his own driveway, and there was nothing police could do about it

When a car is illegally towed in North Carolina, it is up to the victim to prove their innocence in court

Editor’s note: This is Part II of a series on predatory towing in the Cape Fear area

CAROLINA BEACH—Try to imagine coming home from work and finding out your landlord had towed your vehicle from your home without any justifiable cause. Tim Chestnutt doesn’t have to imagine because that is exactly what happened to him in 2015.

Part 1: Predatory towing in Carolina Beach: What can be done and what protection do you have?

After a disagreement with his landlord over an issue unrelated to his vehicle or the property he was renting, Chestnutt said his landlord hired a towing company to remove Chestnutt’s vehicle from the house.

According to Chestnutt, his girlfriend was home at the time and tried to stop the truck driver from towing the vehicle. She told the driver it was not abandoned and could have Chestnutt home within an hour to prove it, but the driver still towed the vehicle, Chestnutt said.

That was nearly three years ago, and Chestnutt still does not have his vehicle back from Rosak’s Towing and Recovery.

Chestnutt was a student at the time of the towing of his vehicle, and did not have the $150 cash Rosak’s was demanding to get his vehicle back. Each day he did not have the money to get the car, the cost would increase due to a storage fee, he said.

With no other options left, Chestnutt went to the New Hanover County Court and was told he could file a civil suit against Rosak’s company—but there was a problem.

According to the courts, Rosak did not have a towing company registered in New Hanover County at that time.

Register of Deeds records show Robert Rosak Jr. operated under several different business names over the years. In 2010 Rosak registered as a sole proprietor for Carolina Auto Sales. In 2013 he registered as Cape Fear Recovery.

In January 2016, Rosak filed paperwork with the New Hanover County Register of Deeds for a sole proprietorship for Rosak’s MotorSports and Towing, months after towing Chestnutt’s car.

Without a company to file the suit against, Chestnutt was unable to have any court ordered remedy, but he is working on filing a suit against Rosak’s Towing, he said.

Eventually, they are sold; and it is all perfectly legal in North Carolina. The owner of the impound lot must petition the courts to sign the title over to the company, and these records are public record. The vehicles can then be sold by the lot owner.

It’s just one of the many stories related to complaints filed against tow truck companies in Carolina Beach. According to Robert Rosak Jr., the complaints against his company are unfounded.

Rosak said he hardly operates in the Town of Carolina Beach, and when he does tow a vehicle it is documented by photos. So anyone claiming they had a parking pass visible when their vehicle was towed has to dispute the photos taken by the driver.

Even if your vehicle is not parked illegally, predatory towing still happens, and there is little that can be done to solve the problem.

A tow-truck driver can tow a vehicle from a parking lot they are contracted to work in, provided that driver claims to see a violation. This violation, in theory, could be made up and as simple as claiming not to see a parking pass.

That might sound like auto theft to some but, under North Carolina laws, police would not be able to provide the victim with any help. Instead, it would be up to the victim to bring the issue to civil court and up to the victim to prove their innocence, a potentially costly endeavor.

Carolina Beach Police Department and the City of Wilmington Police Department both confirmed that it would be a civil matter if a driver tows a vehicle without cause—unless the tow companies are caught in the act by police.

If the driver was caught in the act of removing a parking pass in order to tow a vehicle, then it would be a criminal issue, according to Captain Harry Humphries of the Carolina Beach Police Department.

“If we see a tow truck driver take a pass out of a vehicle or remove it so they can tow the vehicle we would stop them and either issue a criminal summons or obtain a warrant for their arrest for larceny. I have heard of this practice in the past and observed it once,” he said. 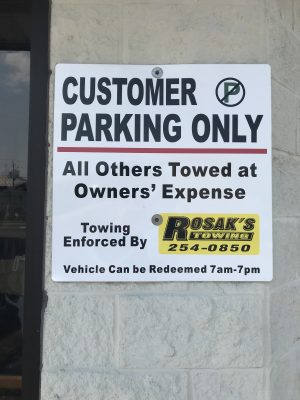 Carolina Beach as a town does have an ordinance that dictates how towing companies must conduct business if they want to work in Carolina Beach.

According to town code, “The applicant shall provide continuous 24-hour on-duty or on-call service at all times for the purpose of receiving and releasing vehicles. The person on call shall be capable of acknowledging requests to retrieve a towed vehicle within 15 minutes of receiving such request, and of releasing said vehicle within 45 minutes of receiving the request. The applicant must at his garage, or in its immediate vicinity, provide sufficient fenced storage space with security lights for storage of vehicles and indoor storage for motorcycles.”

But according to Rosak’s own signage, owners of impounded vehicles can only retrieve them between 7 a.m. – 7 p.m., not 24-hours per day as required by town ordinance.

Another part of the Carolina Beach ordinance states that towing companies must accept all major forms of payment including major credit cards, but according to those who have been towed by Rosak’s company, drivers have demanded cash only.

Humphries said over the years there have been issues with towing companies in the town, but he has not been made aware of any complaints made recently.

“Over a year ago, Town Manager Michael Cramer, myself and the town attorney met with several towing companies who perform private towing on the island and addressed these issues,” Humphries said. “Since then, I have not heard of any complaints other than the one addressed at the June (Town) Council meeting, and that tow was from a private residence, which we have no control over. Some of the Home Owners Associations have dropped their contract with Rosak’s and others still use his services.

“If there are complaints about Rosak’s service, I am not being informed. If so, I would take appropriate action, civilly or criminally whichever is appropriate,” Humphries said.

Carolina Beach Mayor Joe Benson has been looking into dealing with issues with predatory towing in the town, but he said laws at the state level make it difficult to limit actions on private property.

“State law prevents a municipality from establishing ordinances designed to curb/limit the towing of illegally parked vehicles. Believe me — I researched this for quite a while. In fact, I reached out to the City of Raleigh’s town clerk, who provided me with their ordinance—somewhat vague—which addressed towing of vehicles from town-owned property. Even here, there’s limits on what a municipality can do,” Benson said.

Carolina Beach Town Council is expected to discuss the issue again this week.

Election 2022: Evan Folds looks to another four years on NHC Soil and Water board