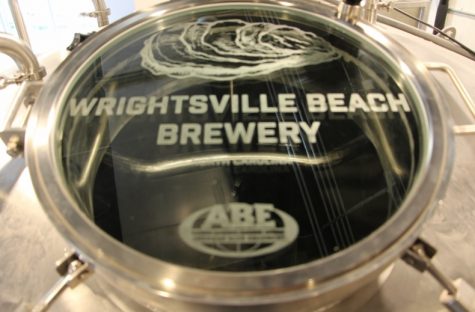 WILMINGTON – With a dozen craft breweries in the area, and more on the way, it is becoming increasingly important for new businesses to set themselves apart. Wrightsville Beach Brewery’s owner Jud Watkins hopes his new establishment’s dedication to all things local will do just that.

“When we started thinking about this, there was one brewery in town. Now there’s a dozen. But I hope the space speaks for itself,” Watkins said. “I hope that people walk in and get an idea of what this place is about, how it’s unique. Especially once they see the beers we have, once they see our menu.” 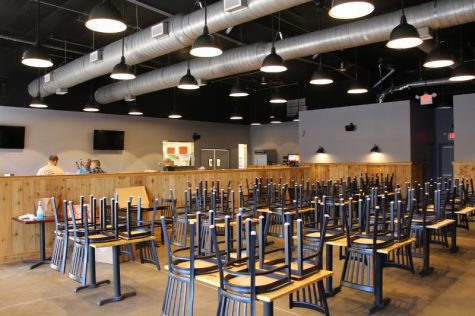 Watkins, who retired from commercial fishing to open the brewery, said his connections with local seafood and fisheries are at the heart of the menu.

“We knew we had to offer something substantial that went well with beer, and pizza seemed like a natural choice. But we’re really trying some outside the box ideas,” Watkins said. “The pizza dough is a 200-year-old recipe, it’s made with beer which helps with the rising. I could just eat the roasted dough, it’s like a good focaccia. There’s an oyster po’ boy pizza. A shrimp and grits pizza, it sounds weird, but it’s incredible. In the summer, our chef is going to do a summer-berry pizza.”

The brewery’s chef, David Owens, was trained in fine dining, not bar food, and Watkins said with a laugh, “Chef is really out of our league. He can cook pretty much anything. He went to culinary school in Dublin, and he’s cooked in 20 some countries – Japan, South Africa, France. The reason we got him, and got him excited about being here, was the access to great seafood. I’m not going through multiple vendors, I’m going through a few friends that I trust, or I’ll get the fish myself. So Chef will be able to do daily specials, and incorporate seafood throughout the menu.”

Watkins is passionate about sustainable seafood, and said he plans on working hard on representing that on his menu.

“First to admit, we’re a little behind the curve in our fishing laws,” Watkins said. “They’ve got to be updated, changed from the commercial fishermen down to the point of sale. We’ve got to stop with the sailfish and the marlin. Even the farm raised fish, it’s still not the same as getting those wild numbers back up to healthy levels. It’s not changing the perception. I mean, if you could eat a farm raised Dodo, a farm-raised Galápagos tortoise, would you eat it? It still wouldn’t be right.”

Watkins said his initial plan for the brewery was simply oysters and beer. While he has since expanded the menu considerably, with Owens’ help, oysters are still at the heart of the operation.

“It all started, 10 or 12 years ago, with my father and I out behind Masonboro sound,” he said. “I grew up here, I’m the fourth generation of guys out there. We’d always take a six pack of beer and eventually it hit us, oysters and beer are the perfect pair. We should do that. We’d be in the driveway, the same propane burner we used to brew the beer we’d use to steam oysters.”

Watkins added, “Our menu is going to evolve, and I’m excited about Chef’s take on pizza, but really what I think will set us apart is that we’ll serve oysters more ways than anyone else, for reasonable prices. We’ll basically give you the oysters at wholesale prices, because we’re not going through three middlemen, but we’ll do everything for you. Shuck it, raw on the half-shell, and cooked too, in as many ways as we can think of.”

One menu item Watkins was particularly excited about was the “Oyster Dinner,” described as “like an Oysters Rockefeller, but a southern take on it. Some spice from andouille sausage. It’s awesome.”

On the beer side, Wrightsville Beach Brewery brings Kevin Zelnio back to the Port City after running his own brewery in Sweden and working as a production brewer at JDubs, “one of the best in Florida,” according to Watkins.

“My favorite thing about Kevin is he used to be a deep-sea ecologist, and he worked out of the Center for Marine Science here in Wilmington,” Watkins said. “So not only does he have an appreciation for marine life, but he’s also got a great sense of laboratory operation. Making beer is part chemistry and part cooking.”

The Brewery’s full bar is set-up to run 40 tap lines. Zelnio is already planning an oyster stout for oyster season, as well as an IPA, a pilsner and other styles.

“We’re not going to be able to open with 40 of our own beers,” Watkins said. “So, in the meantime we’ll be running other local beers. We’ve got Bill’s Front Porch and Ironclad. We see the big distributors as the competition, not our other local breweries. We’re on the same team, you know, all boats rise with the tide.”

Wrightsville Beach Brewery’s bar is also the hub of Amber Watkins’ non-profit charity program. For each of the first 11 months of the year, a different beer will be paired with a local 501(c)3 charity. All the proceeds for that beer will go to the charity.

“Then, in December, in the spirit of giving, we’ll feature all of the charities,” he said.

Watkins said he and his wife “wanted to do this out of the gate. I’m not naïve enough to think we can have the same kind of impact as Bill and Melinda Gates. I can pick on them because they’re millionaires. But you can either work for a long time, make a billion dollars, and give back on the tail end, or you can give back as you go. And that’s what we want to do.”

The Wrightsville Beach Brewery is scheduled to open in late January, serving brunch, lunch and dinner menus and a full bar. Watkins said, “sometime in the next 10 days. We’ve passed all our health inspections, we just need the green light on occupancy from the city and the county.”