Even after organizing 20 benefit shows in five years, Rock for Light founder Charlie Tournoux Smith said his wife made him talk to reporters about his role in the charitable concert series.

WILMINGTON — The Rock for Light Festival was originally supposed to happen no more than four times a year. Founder Charlie Tournoux Smith said, after throwing the first festival, he ended up throwing another one two months later.

Smith enjoyed it so much that afterward, he opted to shorten the name to Rock for Light and planned to make events even more recurring.

“It’s an easy way for bands and artists to come together to raise money because people always support shows,” Smith said.

A brief history of helping

This organization came about in 2013 to fundraise, through live music, for those in need of financial help. Though each show is often for a specific person going through a tough time, Rock for Light also hosts events that bring awareness to general causes.

In the past, benefits have aided cancer relief funding, helped pay medical bills from severe accidents, and led people to rebound after disasters that were unforeseeable.

There have been about 20 benefits in the last five years, but the average has increased in the past few months. Five benefits have already happened from the tail end of 2017 going into 2018. 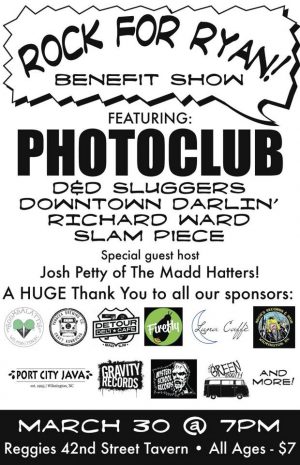 Smith says he’s been trying to put more time into this project of playing music while helping others. Understandably, it bids a difficult task when he works three jobs and helps his wife run her business, The Pepper Mill Shop.

“There’s a lot involved, but everyone is way more than willing to help,” Smith assured. “It’s kind of just like everyone has a part.”

Money for the cause

Smith works hard to curate these shows to save money wherever possible so that, instead, money can be given to the cause.

A short list of his responsibilities typically include: booking bands and venues, making sure the bands rotate performances accordingly, bringing his own public address system, gathering raffle items, and he’s even collected tickets at the door in lieu of staff members.

A humble Smith admitted his wife, Kelly, had to talk him into speaking with Port City Daily about the impact Rock for Light has had on the local music scene and those who have received help from the organization.

Smith said, “I think it’s weird when people are like, ‘Yeah Charlie did this!’ I don’t like it.”

His cousin, CJ Coronado, is also active in Wilmington’s music community managing Shirley Road Records and in the band Leachate. Surprisingly, Coronado only found out within the past year that his family member was behind the Rock for Light affairs.

“One day he was like ‘So who runs Rock for Light?’” Smith said with a chuckle.

Though Smith wears many hats, there are several people, like C.J. Coronado, Kelly Sweitzer, and Andy Karnyski that he leans on for help.

But he also credited artists and businesses that play an integral role.

Among bands and songwriters, there is  A Bottle Volcanic, Monkeyknifefight, Jesse Stockton, Fuzz Jackson, Giant Robot Academy and Rocket 77, he said.

On the business side, Flaming Amy’s, Gravity Records, Chop’s Deli, Detour Deli, Diligent Tattoo, Marks of Distinction Tattoo, RX Restaurant and Hieronymus Seafood have all helped support his shows.  That’s not including the venues he said have supported the cause:  Reggie’s 42nd Street Tavern, and The Whiskey.

The upcoming show Smith is currently spreading the word about is called Rock for Ryan. Though it isn’t directly affiliated with Rock for Light, Smith is promoting it because it’s for a friend. Ryan’s benefit will be at Reggie’s 42nd Street Tavern, 1415 S. 42nd St.,on March 30.

For more info on how to get involved with Rock for Light, visit the Facebook page.