Wednesday morning's decision by the Pender County Board of Adjustment overruled a January decision by the Planning Board to deny the developer's request, which cited residents' concerns that additional growth could tax the development's stormwater management infrastructure. 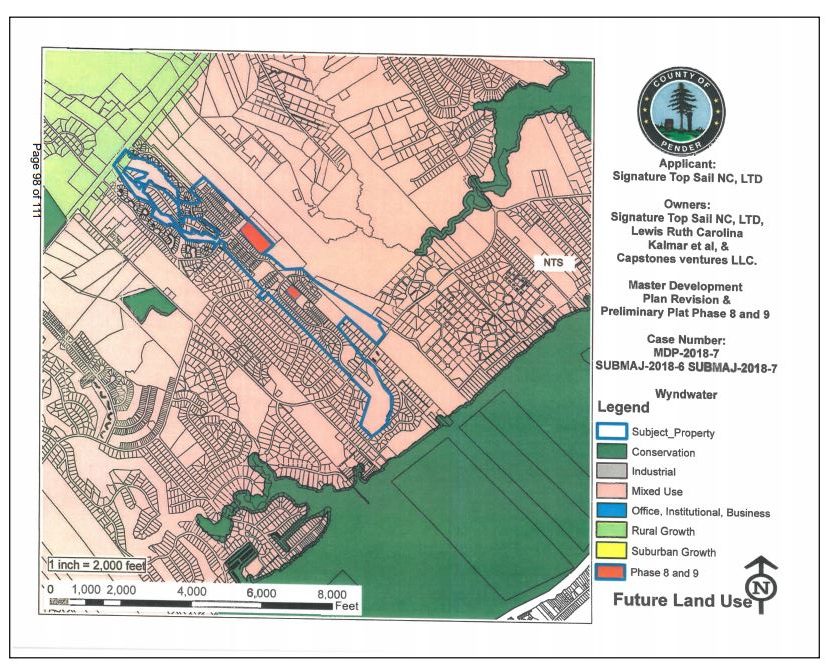 HAMPSTEAD — On Wednesday morning, developers of the Wyndwater subdivision in Hampstead won an appeal to add two additional phases of construction to the 245-acre mixed-use development.

Related: Larger than Wilmington’s The Avenue, massive development ‘The Preserve’ could be coming to Hampstead

At a quasi-judicial hearing before the Pender County Board of Adjustment, Signature Top Sail NC, owner and developer of the land, again made the case to add 36 single family unit lots to the property.

Wednesday’s decision overturned a January motion by the Planning Board to deny the developer’s request to modify the master development plan and build the additional units.

Pender County Planning Director Kyle Breuer said a board order will be drafted outlining today’s decision based on evidence and testimony provided at the hearing; he expected the order to be completed by Thursday.

The Planning Board’s denial in January came after meetings in June and November 2018 with “concerned citizens of Wyndwater,” who presented doubts about existing stormwater management infrastructure to handle further development, according to a report prepared by the county’s planning staff.

Planning staff addressed those concerns and recommended additional conditions for the developer, according to the report. These revised conditions required the developer to construct a temporary construction entrance to the development, as well as resurface and maintain Topsail Greens Drive from U.S. 17 to Aurora Place until an additional access is provided from Wyndwater to U.S. 17.

As for residents’ concerns regarding the capacity of certain elements of the development’s stormwater system, including drainage pipes to capture overflow, planning staff commented on the report that no stormwater violations were found in previous phases of the project.

Attorneys representing the developer filed an appeal on January 4.

“The Planning Board’s denial of the application is based upon no findings or conclusions,” the attorneys stated, arguing that their client had met requirements set out in the county’s Unified Development Ordinance and had “worked extensively” with the county’s planning staff to satisfy residents’ concerns.

Growth of the project

On Tuesday Breuer said the developers had not followed a traditional path of development, where a set number of acres are acquired and then developed.

“The project has been evolving since inception,” Breuer said. “Acquisition has occurred over the last several years to bring in new phases for the project.”

According to a detailed summary of the project, the original master development plan was approved by the Planning Board in 2013 and included 186 single family units on 143 acres of land, including roughly 58,000 square-feet of commercial space. A 2015 revision to the plan increased the total units to 350 and the project density from 2.7 to 3.1 units per acre; in 2016, an expansion to 204 acres of land was approved by the Planning Board.

Over the first three phases of the project, 242 single family lots have been approved, according to the summary.

The Planning Board’s January denial was also based on potential violations and the disturbance of land without prior approvals, according to the report.

“A complaint was received by [planning] staff from concerned residents who noticed clearing and land disturbance on the proposed Phase 8 prior to receiving board approvals. Code Enforcement sent an informational letter to the applicant to cease all land disturbance activities until the case had been disposed,” the report stated.

Before the appeal was approved, Breuer said such a decision would allow the developer to move forward with the two additional phases of construction “with the conditions that were presented by [planning] staff for that approval.”

2 developments each propose 200-plus townhomes for Leland