After an original permit expired due to delays from nearby utility repairs and Hurricane Florence, the owner said he expects construction to begin within eight weeks on a tavern with outdoor spaces and live music.

WILMINGTON — Site plans for a bar and music venue called Dram Tree Tavern, a few blocks southwest of Greenfield Lake, have been submitted to the city’s planning department.

According to Jeff Walton, an associate planner with the city’s zoning and development review division, the plan appears to include renovating an old house on 302 Kentucky Avenue, installing an open deck, and building a parking lot on the property.

Walton said it appeared that original site plans were submitted in 2016, but “for some reason, that project expired due to no activity.”

“It looks like there’s going to be some significant improvements out there,” Walton said.

Plans were submitted Wednesday under the names Walt Cartier of Cartier Construction and Brad Sedgwick of JBS Consulting. They are currently under review by the city’s Technical Review Committee (TRC), which works with developers and the Wilmington Planning Division to ensure such development plans meet the city’s technical standards.

Cartier, the owner and developer of the project, said the tavern was permitted in 2017 but construction was delayed when the city had to replace gas lines on Burnett Avenue and again by problems that arose from Hurricane Florence. He said he re-submitted the application this week because “we have gone past the 18-month time period without beginning the project.”

“We hope to begin construction within eight weeks on what will be a tavern with outdoor spaces and live music,” Cartier said.

Carter said further details will be revealed after the permitting process, and that “Dram Tree Tavern” is a working title — the actual name may be different when construction is completed.

Walton believes the old, dilapidated house has plenty of potential.

“Everyone knows that little blue house out there,” Walton said. “It’s got this 1950’s vibe to it. I think they can really parlay off the architecture of the house.” 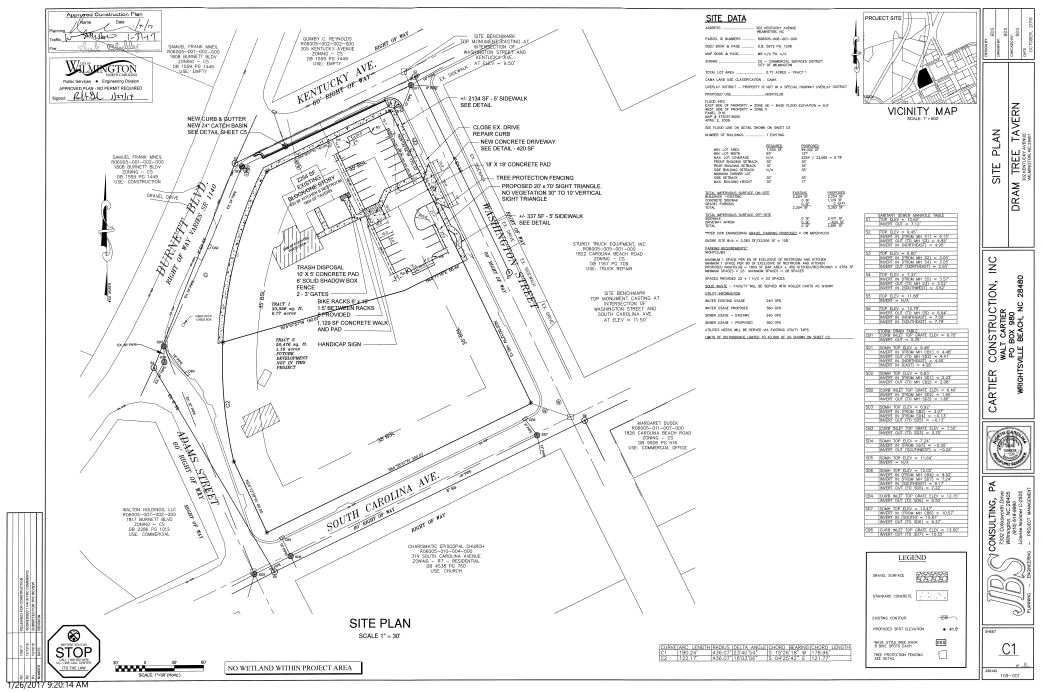