After consulting with the city to make sure everything was in order, a Wilmington man secured a short-term rental permit and then closed on a house for the specific purpose of renting it out. Then, after a neighbor complained, the city changed its mind, revoking the permit and leaving the man stuck with property he cannot use as intended.

WILMINGTON — Investing in real estate, and in particular short-term rentals, can be a risky business in Wilmington these days. Despite seeming contradictions to state law prohibiting the regulation of short-term rentals, the City of Wilmington continues to enforce its new ordinances denying some homeowners the ability to rent their houses and allowing others.

But as one man is finding out, even when the proper protocols are followed and permission is given to rent a home, nothing is certain. Now, he has to plead his case to the city’s Board of Adjustment (BOA) on Oct. 17.

In April, Matt Steiner found a house he was interested in purchasing for the purpose of running a short-term rental.

But before he would close on the house he wanted to be sure that he could get a rental permit from the city for a whole-house rental since the new ordinances restricted the number of units allowed in a residential area.

After discussing the issue with city staff, Steiner was told he would be able to apply for the short-term rental permit for the home before he closed on it as long as he provided a purchase contract with his application.

He did just that — and was awarded a short-term rental permit.

But due to the city’s rental ordinances, the granting of the permit meant any house with a 400-foot buffer area could no longer operate a short-term rental since it was in a residential district.

“The City of Wilmington — with knowledge that he was contract owner and with a copy of the offer to purchase — approved STL2019-0159 (the STR permit) and properly awarded Steiner with the permit. Upon information and belief, a neighbor within 400 feet who could not apply, encouraged the city to revoke Steiner’s permit, and the city did in fact revoke Steiner’s permit,” according to documents submitted to the BOA.

Despite being told by Wilmington staff that he could apply for the permit while under contract, and being awarded the actual permit, now the city is claiming the permit was issued in error.

In June, the city received the application from a neighbor wanting to obtain a permit for a whole-home rental, to which the city initially told the applicant, Mr. Holleman, he was ineligible for the permit because Steiner had already been issued his.

Less than a week later on June 25, Holleman told city staff that the permit had been issued improperly since Steiner did not own the property at the time of registration.

This was true and city staff confirmed that Steiner took ownership of his home on June 27, 2019, months after applying for the permit. 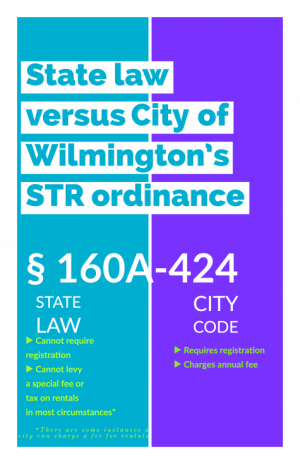 Steiner argues that the city has wrongly interpreted its own code since there is nothing in the plain language prohibiting him registering for the short-term rental program while a contracted owner. In fact, city staff told him this was acceptable and he included his purchase agreement with his application.

But even if the city does interpret the ordinance in that way, Steiner argues the city should be prevented from revoking his permit.

“At all times Steiner sought and reasonably relied on advice and direction from representatives of the city, followed up on the advice of city employees, validly applied as contract owner, was a natural person, and furnished the city copies of the application including proof that he had the property under contract to purchase. Mr. Steiner reasonable relied and purchased the property based on the city’s guidance and representation. The city should be estopped from revoking said permit as it would be unfair and inequitable to do so and would cause irreparable harm and significant financial damage to Steiner,” according to BOA documents.

This is not the first appeal the city is seeing after implementing its short-term rental ordinances, which the city did despite a state law prohibiting municipalities from regulating rentals.

“In no event may a city do any of the following: (i) adopt or enforce any ordinance that would require any owner or manager of rental property to obtain any permit or permission from the city to lease or rent residential real property,property or to register rental property with the city, except for those properties individual rental units that have either more than four verified violations in a rolling 12-month period or two or more verified violations in a rolling 30-day period, or upon the property being identified within the top 10% of properties with crime or disorder problems as set forth in a local ordinance.”

Yet the city continues to believe that this does not apply.

When asked, City Spokeswoman Malissa Talbert said, “The city’s position is that this law deals with building inspections whereas the city’s new ordinance deals with zoning.”

Whatsmore is that in July, the state legislature passed an additional law clarifying its stance to ensure vacation rentals are included under the statute. In fact, the title of that law is, “AN ACT TO CLARIFY THAT PROPERTIES SUBJECT TO THE VACATION RENTAL ACT ARE ALSO SUBJECT TO THE GENERAL STATUTES GOVERNING CITY AND COUNTY ENFORCEMENT OF HAZARDOUS AND UNLAWFUL CONDITIONS.”

Still, the city’s Board of Adjustment has already ruled against one short-term rental owner despite being informed of this new law.

Despite the apparent conflict between city ordinance and state law, Wilmington’s STR regulations remain a legal fiction, that is, a legal principle assumed to be true for the purposes of enforcement and quasi-judicial decisions like those of the Board of Adjustment. It is likely a homeowner will be forced to take the city to court to get a ruling on whether or not Wilmington’s code goes against state law.