Update: This article has been updated to include a comment from Leland.

BRUNSWICK COUNTY — With no regular meetings scheduled until after election results are expected in November, Brunswick Regional Water and Sewer H2GO has yet to vote on a proposed settlement agreement that would settle the region’s dispute over providing water and sewer utilities.

Neither has Leland, the plaintiff in the multimillion-dollar utility lawsuit surrounding the rightful ownership of H2GO’s assets. And Belville, the defendant, just announced its vehement opposition to the agreement as it stands. This comes two months after the northern Brunswick County governments jointly announced a kumbaya after years of tension and increasing legal costs.

H2GO held back-to-back meetings this week; a special called meeting Monday and its regular board meeting Tuesday. Though the proposed agreement was discussed at both, the board did not announce a vote taken in closed session nor did it take action in open session after.

Just over an hour ahead of H2GO’s Tuesday meeting, Belville announced in a press release its opposition to the legal document in its current version (read the full press release at the bottom of this article). However, when asked about the document, Chairman Jeff Gerken said there is no agreement and described it as still being a “work product.” Before entering closed session Tuesday, Gerken said he was unaware of Belville’s press release and would need time to review it before offering any comment on its contents.

Trombley said she assumed the candidate’s “friends at Belville” provided the information; Gerken said he had serious concerns regarding a purported breach of legal confidentiality. Both Hosmer and Laub maintain they sourced information from Belville’s press release, which the town shared an hour and 20 minutes before the meeting began. During the Commissioners’ discussion, Hosmer got up and physically handed Gerken a copy of the release.

“We are continuing to focus on a regional solution and settlement,” Hilary Snow, Leland’s spokesperson, said Wednesday in response to Belville’s release.

Both H2GO and Belville denied public records requests for a copy of the agreement (Belville’s Town Administrator cited a confidentiality statute and H2GO’s clerk said she did not have a copy).

In its press release, Belville claims Leland has inserted unrelated annexation agreements within the proposed settlement agreement. A map provided in the release, which appears to have been created by Leland, shows large swaths of land outside of current Leland municipal limits depicted as “development areas” (view the full map below).

“Leland even made it easier to see their power grab in living color by providing the attached map that vibrantly highlights their desired takeover of northeastern Brunswick County. It provides irrefutable evidence that Leland’s goal in the H2GO [reverse osmosis] fight never had anything to do with protecting their citizens from Belville. Leland just wanted to grab money and power by taking control of H2GO assets and imposing new annexation agreements,” the town’s press release states.

The release states the 63-page agreement contains no commitment to construct H2GO’s long-planned aquifer-based reverse osmosis plant, and would transfer millions in debt to H2GO. By “dumping millions” into the sanitary district’s debt balance, Leland would hamstring H2GO’s ability to issue debt it needs to construct the RO plant, Belville claims.  Leland would also “gain an ownership interest” in H2GO’s assets that it currently does not have, according to Belville (the town’s release does not specifically describe what exactly this means, a definition Leland’s Town Manager declined to offer a substantive description of last month).

“This latest version is nothing more than a bludgeon to reduce H2GO to a subservient status, a subservient position, to Leland,” Hosmer said at Tuesday’s meeting.

The Town of Leland meets Thursday for its regularly scheduled meeting, its last before election results are learned in November. At the town’s agenda review meeting Monday, Manager David Hollis said if there is an update on the proposed settlement to provide Council, it would be provided in closed session Thursday. 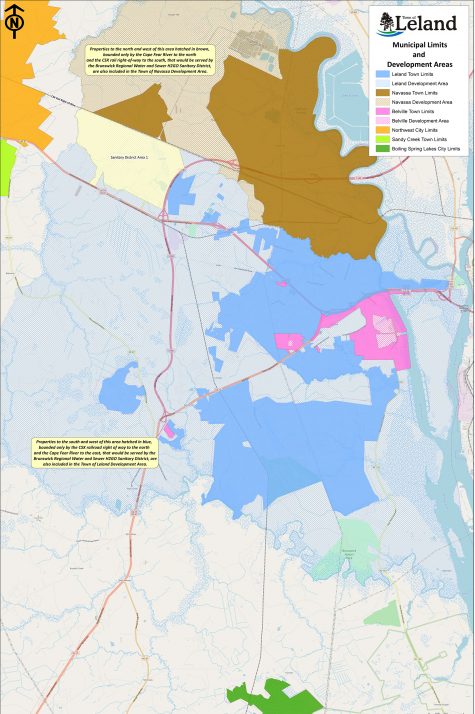 Why is Cape Fear on fire?