Freeman Park sales on the decline after erosion issues; parking revenues on the rise

CAROLINA BEACH — The partial closure of Freeman Park has cost the Town of Carolina Beach, although things started off as a banner year with more than $44,000 in revenue over that of 2018 according to its parking services provider Lanier Parking.

“We were up $44,000 compared to last year and then it just started going down with the closures,” Isiah Mouw, vice-president of municipal operations for Lanier Parking said during this week’s Town Council meeting.

With more than 7,000 annual passes sold since December of 2018 Freeman Park is one of the town’s biggest revenue generators already bringing in more than $650,000 this year.

Lanier has noticed some issues regarding scofflaws trying to duplicate Freeman Park passes by photocopying them and staff is suggesting the implementation of new decals with holograms in them and possibly the use of QR codes.

Town Council previously voiced their concerns with people getting onto Freeman Park before an attendant was at the booth to avoid paying to go out for the day. Lanier suggested utilizing license plate reader technology to help cut down on these issues.

It would also prevent anyone from duplicating a season pass since it would be tied to the vehicle’s license plate.

The town switched parking service providers at the beginning of this year and according to Mouw, there have been several improvements to the parking systems made.

According to his presentation, when Lanier took over the parking contract about half of the parking pay-stations were not functional and around 40% of the town’s parking meters were not in operation; now, 90% of the meters are operational.

“That doesn’t mean that 10% of the meters are not accepting money now it just means 10% of them are having [issues]. Whether it’s the battery having to be changed daily or the solar panels not working,” he said.

Councilman Steve Shuttleworth noted the town’s decision to increase parking rates did contribute to the increase in revenues, not just the fact that the parking meters were functional. 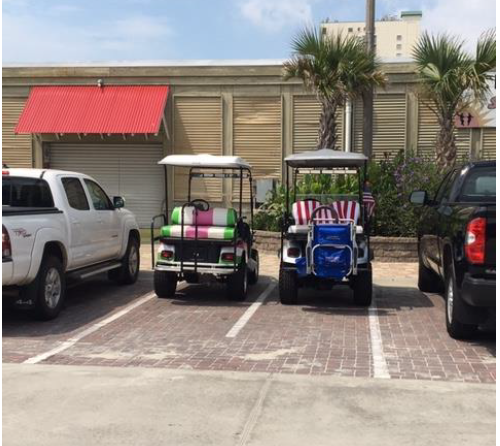 Carolina Beach is unique in the fact that it allows golf carts to traverse its streets (with some limitations and requirements). By allowing these low-speed vehicles on the roads and in town, the question of where to park has come up in the past.

Golf cart parking spaces are already a thing in town, but carts often take up full-sized vehicle parking as well (other issues in the past have been golf carts simply parking anywhere they could fit).

Lanier has some experience with these issues and is suggesting the addition of golf cart parking spaces within regular spaces. This simple solution would add a smaller line lengthwise down the spot to allow for the parking of two carts in one space. It would allow carts to utilize regular parking spaces but be more efficient while doing so.

Town Council did not take any action on Tuesday but did request Lanier Parking to come back to give a more in-depth presentation and make recommendations for the 2020 season since parking enforcement in the beach town ends in November.