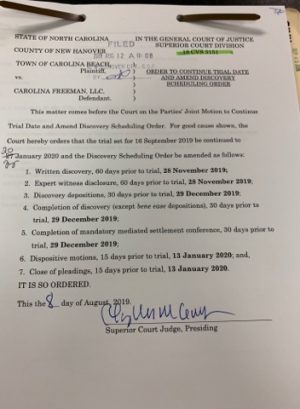 CAROLINA BEACH — Barring the news that Freeman Park would be facing periodic closures thanks to erosion issues and overcrowding, news from the park has been significantly less dramatic this year — but pending lawsuits with landowners on the north end of the island are still in the works.

Four ongoing suits filed in New Hanover County Superior Court against several different LLCs (that appear to be controlled by the same entity) have been granted extensions until January of next year.

The trial was supposed to be scheduled for September, but a joint motion to continue the trial date was submitted earlier this month. It has since been approved.

The litigation stems from the town’s use of eminent domain. Carolina Beach had previously tried to use eminent domain to claim most of the property located at the north end of the island for itself but later rescinded those notices.

Instead, the town issued notices of condemnation for a temporary use — to renourish the beaches. But property owners did not like that, either, and demanded a jury trial to settle the matter.

In the counterclaims outlined in one of the four suits pending, Carolina Freeman, LLC claims the town offered to pay $1,500 as just compensation for the property — an amount the property owners deny is reasonable.

Town leaders have been quiet when it comes to commenting on the case but have continued to meet with their attorney in closed sessions to receive updates on the litigation.

Town Council will have a closed session meeting on Aug. 27, 2019, to discuss the pending lawsuits.

Catch up with some related Freeman Park reporting here:

Share
Facebook
Twitter
Email
Print
Previous articleTrina Maria Shepard, 59, cherished for her quick wit and sense of humor
Next articleHelen Hawley Bennett, 90, retired teacher who was happiest in the classroom with her students