Leland is working out the kinks of its proposal to Brunswick County for an ETJ, a planning tool that could help the town organize its scattered town limits into a smooth transition. So far, Brunswick County has at least twice turned down the idea.

LELAND — After at least two failed attempts to earn Brunswick County’s permission, Leland is set to formalize its pitch for an Extra-Territorial Jurisdiction (ETJ).

Town officials will meet Tuesday afternoon for a special meeting focusing on an ETJ workshop at Leland Town Hall.

Though it has been discussed in prior public meetings, Tuesday represents a public venue fully dedicated to the proposal.

Leland spokesperson Hilary Snow said the meeting will be an educational and instructional workshop for Council to learn more from staff about ETJs. Snow said the town was not aware whether county officials plan to attend, but said they are certainly welcome.

Brunswick County manager, Ann Hardy, said she was not aware of any county staff members planning to attend the workshop. All Commissioners also informed Hardy they did not plan to attend.

Why Leland wants an ETJ

ETJ’s allow municipalities to set land use rules outside of city limits. However, Leland cannot grant itself an ETJ.

North Carolina State Statutes empower municipalities to do so if counties aren’t already enforcing their own zoning, land, and building codes — but Brunswick County is.

On Tuesday, the town will aim to improve its sales pitch to get the county on board. For Leland, getting the county’s permission to establish one would be a huge planning step, that could help prevent future planning headaches.

The northern Brunswick County town has accepted several satellite corporate limits during its growth spurt this decade. However, new state laws passed in 2012 make involuntary annexation more difficult, requiring a referendum vote by property owners in the area to be annexed; while the town continues to pursue voluntary annexation agreements, it has also led the town to look at other ways to exert planning control over the surrounding area.

The town says it wants to control uniform, smart, growth in an area that approximately doubles its corporate limits. The ETJ would create a contiguous area of planning and zoning under Leland’s control, rather than the jagged and sporadically-annexed region that currently exists.

Brunswick County already has eight ETJs among its 19 municipalities. The county’s resistance to granting Leland one of its own has confused and frustrated town council members.

At least one Brunswick County Commissioner, Pat Sykes, recently shared concerns granting an ETJ would lead to forced annexation — although Skyes did not specify how an ETJ could influence that process. Brunswick County Chairman Frank Williams was skeptical about the philosophy behind ETJs in general at a board meeting in January. There, he stated he would not want to be subject to zoning rules by a town if he lived outside of it, without a means to vote for town elected officials. 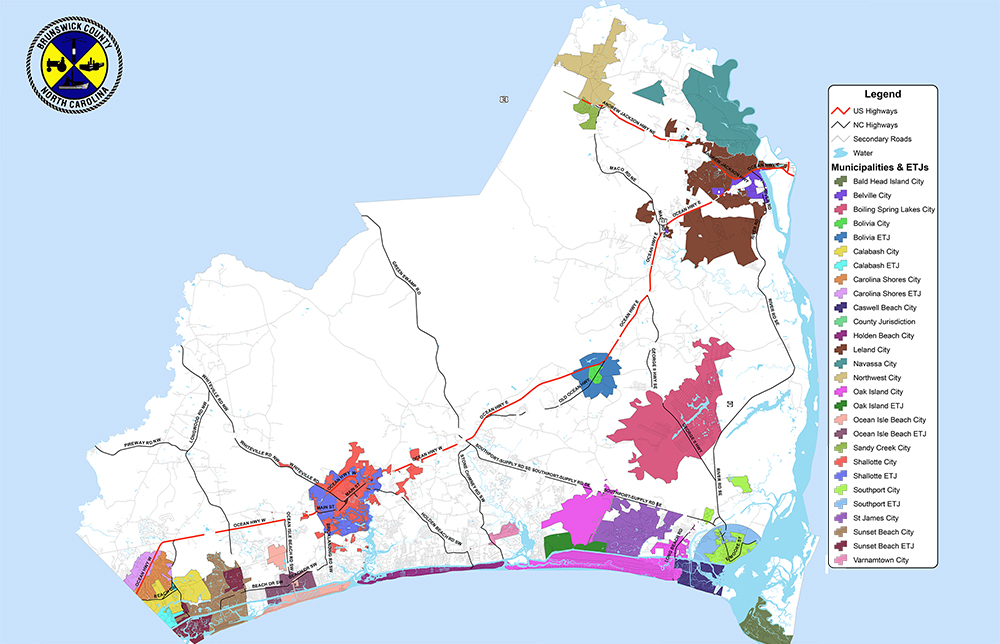 Of the eight already established extraterritorial jurisdictions in Brunswick County, none are located among the county’s northern municipalities. Areas of the Carolina Shores ETJ have since been removed from this 2009 county ETJ map. (Port City Daily photo/Courtesy Brunswick County Geographic Information Systems)