How we got here: Recent activity at Freeman Park is 10 years in the making

While there has been a flurry of activity around Freeman Park in recent months, it all dates back more than a decade, when an LLC started buying up individual parcels of land, one for as little as $1.

On the timeline: There’s been a lot of activity regarding ownership of the land around Freeman Park in recent months. But, it really started more than a decade ago.

CAROLINA BEACH — Land at the North End of Carolina Beach, adjacent to Freeman Park, has remained undeveloped and, according to one coastal expert, it may be difficult to change that. But that has not stopped recent attempts to corral all of the land under one owner; making this piece of land just outside Carolina Beach’s town line one of the biggest stories to come out of the beach town in years.

From a land grab started by a mysterious corporation, to the town’s notice of eminent domain, to the payment of $15,000 to one of the FBI’s most wanted terrorists, there has been no shortage of news coming out of Freeman Park.

But how exactly did this seemingly innocuous piece of land cause this much controversy?

The land in question is one of the few undeveloped large tracts of land along the Atlantic Ocean in the area. Located just north of the town’s limits, the area is within Carolina Beach’s extra territorial jurisdiction.

Despite the fact the land is located within a Costal Barrier Resource System and development would be difficult, deeds to the land have changed hands several times over the past few years.

Senior Planner with the Cape Fear Council of Governments Wes MacLeod said, “Freeman Park properties are located wholly within a designated Coastal Barrier Resource System. Essentially, no federal funds (including town/state funds that are in any way supplemented by federal funds) may be used to support development in these areas. This makes development in these areas extremely difficult. Just compensation must consider this underlying and extenuating circumstance – not to mention the current conservation zoning designation.”

Over the past few decades, the property had largely been in the hands of private families, including the eponymous Freeman family. Then, in the mid-2000s, an LLC began the process of purchasing the land from family members and heirs to the land – that corporation was Freeman Beach LLC.

Little is known about the corporation, but according to the North Carolina Secretary of State, the LLC lists Don Formyduval as a member, and manager as Woodrow W Marlowe Jr. The company was officially formed in 2007, which is when the first acquisitions of property began.

According to the New Hanover County Registrar of Deeds’ website, Freeman Beach LLC entered into an agreement for a quitclaim deed with Myrtle H. Sigman for the grand total of $1 for a piece of land.

Following the initial quitclaim deed acquisitions, the LLC acquired several other parcels of land at the Freeman Park area for sums of $10.

The company’s principle office is listed as 9292 U.S. Highway 701 South, Clarkton, N.C., which also happens to be the home to the Clarkton Cotton Company.

Freeman Beach LLC is not the only corporation that has staked claim on the Freeman Beach property, but it appears that neighboring LLCs are controlled by the same people.

Because of the familial history of the land in question, heirs to the property proved difficult to track down. Since Freeman Beach LLC had a difficult time acquiring all the property due to the unknown status of several of the heirs, the corporation turned to the courts for help.

As it turned out, one of the heirs to a piece of land was Assata Shakur, aka Joanne Deobrah Chesimard, a fugitive from justice and one of the FBI’s most wanted domestic terrorists. According to the FBI, Shakur escaped from prison where she was serving a life sentence for the murder of a New Jersey State Trooper.

According to the FBI, “One trooper was wounded and the other was shot and killed execution-style at point blank range.”

Shakur reportedly fled to Cuba, where the government says she has resided since 1984.

Since Shakur was the rightful heir to a parcel of land that she inherited from her mother, Dorothy Johnson, and her whereabouts were unknown, acquiring the land proved to be difficult for the LLC.

On June 9, 2015, Assistant Clerk of Superior Court Lisa Bell, at the behest of Freeman Beach LLC appointed, Matthew Dixon Esq. as guardian ad litem for Assata Shakur. There were other heirs to the land that were still unknown, and the court also appointed a lawyer to represent them.

Freeman Beach LLC then filed an order in court to force the sale of the approximately 10 percent of the land in a 170-acre parcel it did not control.

The order states, “The interest of Assata Shakur may not be actually partitioned without substantial and material injury to the value of that interest … Likewise, the absence of the owner, Assata Shakur, who on information and belief is residing in Cuba, would likely result in a comprise in ability to maintain ad valorem tax payments on said lot …”

The town gets involved

The Town of Carolina Beach for the most part was not involved in any of the actions taken at Freeman Park by the courts or the LLC. In 2016, the town was notified by Clifton Hester, the lawyer for several of the LLCs, that the land owners were requesting the campsites be removed from the park.

In 2017 the Town Council held a meeting to discuss possible rule changes at the park, along with the closure of several campsites due to safety concerns.

In February of 2018, tensions peaked when the LLC installed rope fencing and planted sea oats on the dry sand beach at Freeman Park. As a result of the corporation’s actions, the town closed the park temporarily until a solution was found.

Freeman Park remained closed for approximately one week and the town sent notices to the corporation issuing a notice of violation and demanding the removal of the fencing.

The LLC refused to remove the ropes and posts, and town employees eventually removed the fencing.

In March it was revealed the town was considering the purchase of one of the pieces of property at Freeman Park not owned by a corporation. The town negotiated a $500,000 purchase price for one piece of land, and it was later approved by the Town Council.

Shortly after the town approved the purchase of the land, town leaders also approved a more radical motion that would allow the town to acquire all of the property in question.

Town Council approved a motion that would authorize the town to begin the notification of property owners of the town’s intent to acquire the property either through voluntary sale or eminent domain.

On April 9, it was revealed that the town had offered property owners a fraction of the sale value of the property as “just compensation” if eminent domain were used.

The LLC has not responded to Port City Daily’s requests for comment, and it is not yet known how the corporation will react to the town’s acquisition request. 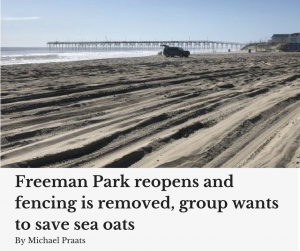 ‘A relic from the War on Drugs’: Advocacy groups call out use of N.C. Drug Tax, proposed to fund WPD Law Enforcement Museum