Can Wilmington’s working class afford to live in the city?

Editor’s note: This is part one of a multi-part look at the cost of living in Wilmington and its effect on the people who work here.

WILMINGTON — Supply and demand: one of the most basic concepts of economics, it dictates everything from the price of a gallon of milk to the cost of an apartment’s monthly rent. So, when it comes to evaluating the cost of living in Wilmington, supply and demand is king.

New Hanover County is one of the smallest counties in the state, yet the City of Wilmington is the ninth most populated city. Not only that, Wilmington’s population is expecting to grow by more than 50,000 new residents over the next 25 years.

This increase in population means a higher demand for property, as well as goods and services. With a finite supply of land, homes and rental units in the area, the increased demand will inevitability lead to an increased cost of rent and house payments.

This is why affordable housing has become a topic of discussion amongst residents as well as city and county leaders. The issue has been so important, it led to the creation of the Joint City of Wilmington/New Hanover County Workforce and Affordable Housing Ad Hoc Committee.

What is affordable housing (and what is it not)?

To define the ambiguous and often misinterpreted term, the ad hoc committee considers housing to be affordable, “… when housing costs do not exceed 30 percent of a household’s total gross income. Housing costs include utilities, property taxes, association fees, insurance, and maintenance.”

There is another term being used to define “affordable housing” in an effort to distance such housing from the misconceptions and negative connotations people associate with the term. Local leaders have started referring to workforce housing.

Workforce housing refers to, “Housing that is affordable to households who earn between 80 and 120 percent of the area median income. Meaning, in the City of Wilmington families earning less than $78,120 in 2016 are the target audience for workforce housing.”

While the 30 percent threshold gives local leaders a good place to start, there are still discrepancies when it comes to the differences in wages earned. According to state data, almost 30 percent of the workforce in New Hanover County in 2016 were retail and food service employees with an average weekly wage under $500. Extrapolated over 52 weeks, the average income for these workers before taxes was $22,698.

For these employees, 30 percent of their annual income would equal $6,809 spent on housing annually including utilities and other expenses – the average cost of a one-bedroom apartment in Wilmington according to bestplaces.net is $720. 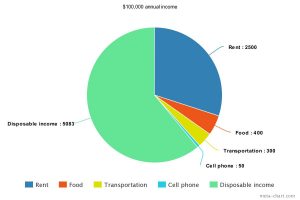 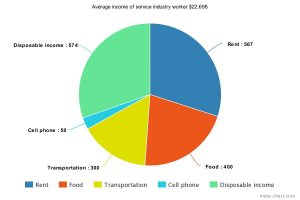 The two graphics above show the amount of disposable monthly income after paying 30 percent of income for housing/rent for a service industry worker compared to someone making $100,000 annually.

At $720 per month, the annual amount spent on rent alone would be $8,640, or 38 percent of the average income for the service industry workers.

“It’s a pretty crude marker. Spending 30 percent of your gross income when you make $100,000 a year leaves you with $70,000 for everything else. Spending 30 percent when you make $10,000 leaves you with $7,000 for everything else – you’ve got to eat the same as the person making $100,000, you have the same clothing needs, so it is a pretty crude measure,” Executive Director for Cape Fear Habitat for Humanity Steve Spain said.

A problem that affects everyone

While there are residents in the Greater Wilmington Area who are not cost burdened when it comes to housing, that does not mean affordable housing doesn’t affect everyone.

When people who work in the city are forced to live further away from their jobs, commute times increase, since more vehicles must travel further to get to work.

When service industry employees, police officers, nurses and other people who live within that 80-120 percent of the area median income cannot afford to live in the area they work, they have to commute, or they start looking for jobs where they live.

The implications of a deficiency of affordable housing extend past the service industry or tourism, the next largest employment industry in the area.

“Let’s say you want to be able and go to your doctor and have the lab run their tests, well a lot of people working in that lab need affordable housing – or they are traveling from a long way away. So, if we get five inches of rain, maybe there is nobody there to draw your blood when you go in,” Spain said.

Home ownership is something Cape Fear Habitat for Humanity strives for; Spain believes that when there are more residents paying mortgages, they become more invested in the community, and they build wealth. About two-thirds of middle class wealth is in real estate, Spain said, therefore helping people become homeowners helps build a strong middle class.

When people don’t have enough money beyond their basic needs, they’re not building our economy. They are not spending, they’re not out buying dinner or buying a new car … if you have to spend 80 percent of your income on housing there is nothing left,” Spain said.

Spain compares affordable housing the Henry Ford’s theory of paying his employees enough money to purchase one of his vehicles.

“If your workers can’t afford decent housing near you, how are they going to be able to afford what you’re selling?” Spain said.