North Carolina has now fully vaccinated 1.1. million people across the state. That’s around 10 percent of North Carolina’s 10.49 million population. Scientists say herd immunity will be reached when 72% of the population either has been exposed to Covid-19 or received a vaccine.

Though Covid-19 data continues to improve — under 1,000 cases were reported Tuesday — Gov. Roy Cooper made it clear that North Carolinians cannot lose site of the end goal.

“There are more signs of hope that we are making progress toward putting that pandemic behind us,” he said, pointing to the state’s positivity rate leveling consistently around 5%, where health officials want it. “But it’s not the time to abandon prevention efforts. Preventing spread must continue to be a focus.”

Though states around the nation are easing restrictions on business capacity and dropping the mask — including our neighboring South Carolina — Cooper said he will remain vigilant in protecting constituents and avoiding backsliding on progress being made.

“It puts us closer to a time to hug our loved ones and gather without fear of severe illness,” he said.

While Cooper acknowledged the CDC’s recent guidance of approving fully vaccinated people to gather safely without masks, he said he isn’t jumping the gun quite yet and putting the public at risk.

“We will listen to health officials and what they are saying across the board,” Cooper said. “We don’t intend to lift the mask mandate in North Carolina.”

According to North Carolina’s top health official, Dr. Mandy Cohen, North Carolina received 80,000 doses of the Johnson & Johnson shot last week and will not receive another shipment until next week. Cohen said while it may be smaller, it will ramp up again in April with increase in production. In fact, the federal government assured states more J&J doses would be coming to providers.

The state has been averaging receipt of 225,000 first-dose Moderna and Pfizer vaccines as of late. Second doses come in a separate shipment. The federal government covers vaccine supply of the federal pharmacy program, some federally backed mass vaccination sites — like the FEMA one opening in Greensboro tomorrow, which will vaccinate 3,000 people a day for eight weeks — as well as federally qualified health centers.

“All of that improves ability to get supply out to Carolinians,” Cohen said.

For now, health officials are concentrating on equitable distribution of the vaccine, according to data on the state’s vaccine dashboard. Earlier in the week Bloomberg recognized North Carolina for its top-notch data-tracking measures. New metrics have expanded on the dashboard, allowing users to break down dosage demographics according to race, ethnicity, age and gender by week and month, in each county or the state.

“Over 20% of first doses administered have gone to Black North Carolinians,” Cohen said. “We will push efforts so everyone can get their shot.”

The state has concentrated on the Hispanic communities over the last week as well. Whereas it was only reaching 3% of the population beforehand, it has brought those numbers up to 7%, according to Cohen. The Hispanic population in North Carolina is around 9%.

“We will continue to deploy state resources to address barriers like transportation and internet access,” she added, to ensure everyone has access to get an appointment and a vaccine.

While the state continues to vaccinate groups 1, 2 and 3, Cohen said they are looking at opening Group 4 possibly sooner. Mar. 24 will be the absolute latest date the state will progress into a new phase of vaccinations.

“The medically vulnerable, those in congregate living, and 65 and older have had a chance to get vaccinated,” Cohen said. “All health officials want to move from one group to the next as quickly as possible.”

“We are going to continue to get shots off shelves and into arms,” Cooper said. “When you look at NC numbers, I think we have saved lives with actions we have taken. Hopefully, we can get on other side of this soon.”

Have ideas or tips? Email info@portcitydaily.com 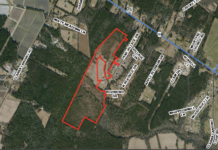