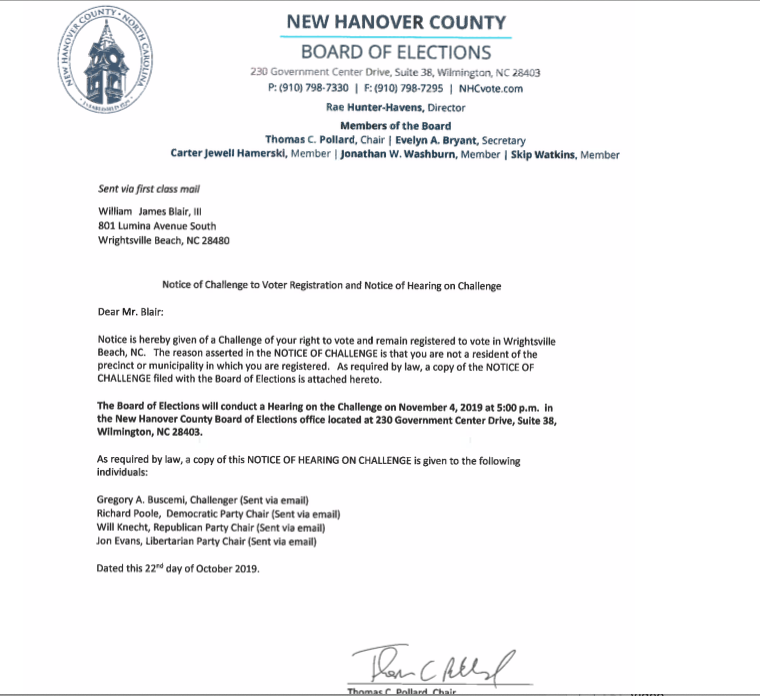 WRIGHTSVILLE BEACH — In North Carolina (as well as most places in the country), voters register to vote based on where they live full time — and as has been seen in Surf City, registering to vote at a place other than your home can lead to serious legal problems.

Just a day before municipal elections, the New Hanover County Board of Elections will hold a hearing on a voter challenge for current Mayor Bill Blair — a challenge filed by mayoral candidate Greg Buscemi.

According to Buscemi, he filed the challenge against Blair and his family “based on the fact that they’ve lived in Wilmington since 2012.” Bill Blair, Mary Blair, and Mary Cameron Blair-Cooper will all have to face the Board of Elections Monday evening.

A preliminary hearing was held in October and now the actual hearing will take place at 5 p.m. Monday at the New Hanover County Board of Elections. But a hearing does not mean Blair and his family are guilty of anything; in fact, proving residency in North Carolina is not always black and white.

The intentions of voters are often more important than actual documentation in North Carolina. That’s because an individual’s residence, as defined by General Statute §163A-842, boils down to the “intention to return.”

Related: As a North Carolina voter, it doesn’t take much to prove residency, even if challenged