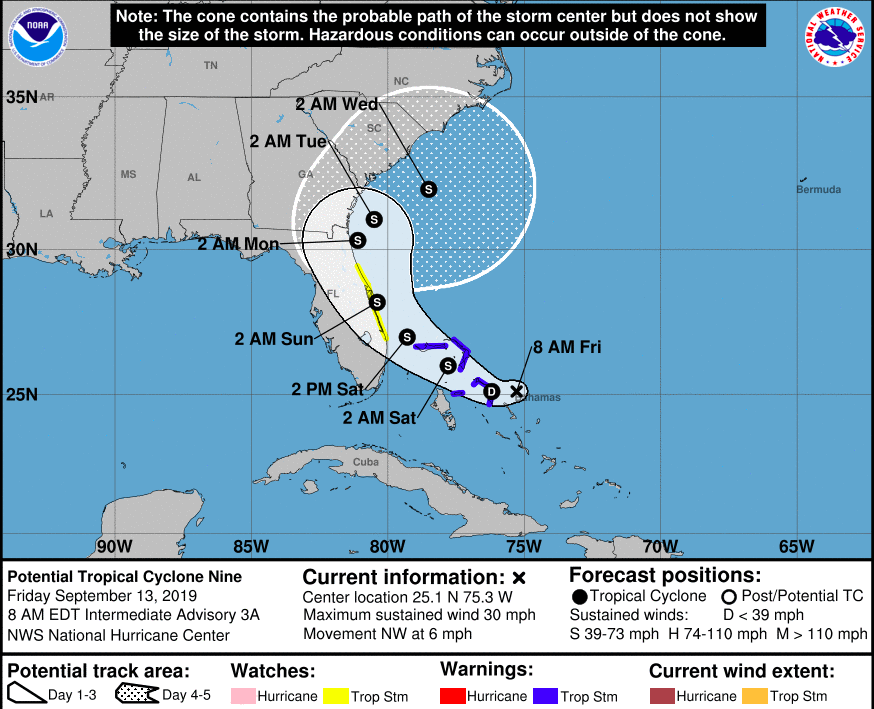 SOUTHEAST N.C. — The 2019 Atlantic Hurricane Season is in full swing and as usual for this time of the year, tropical systems are developing across the Atlantic. Just a little more than one week following Hurricane Dorian a new tropical system has potential effects for the region.

For now, the system is known as ‘Potential Tropical Cyclone Nine,’ and is located north of the Bahamas.

According to the National Weather Service (NWS), the storm is expected to be upgraded to tropical storm status

“Maximum sustained winds are near 30 mph (45 km/h) with higher gusts. Some strengthening is forecast during the next 48 hours, and the disturbance is forecast to become a tropical depression or a tropical storm later today or Saturday. An Air Force plane is en route to investigate the disturbance,” according to the NWS.

Forecasting models show a greater amount of uncertainty than normal regarding the heavy rainfall amounts expected across the Carolinas according to the 5 a.m. update on the system.

According to graphics provided by the NWS, the storm’s projected path and ‘cone of uncertainty’ do have Wilmington and the entire Cape Fear Region in it. But if it does affect the area it will not be until next week sometime.

Port City Daily will continue to monitor the storm and provide updates as they are provided to us.