This Fourth, when water demands could peak, is just another day at Kings Bluff

From a 14-foot gator to generations of beavers, record-breaking water demands at Kings Bluff Pump Station are part of the gig for its leading man.

SOUTHEASTERN, N.C. — Neighbors of the most critical element in the Cape Fear region’s water supply system don’t even realize it’s there. Nestled behind old farmland on the Cape Fear River, Kings Bluff Pump Station humbly runs, non-stop, with just one full-time man at the helm.

Last month, it sourced 1.283 billion gallons of raw water from the river, the most it’s ever supplied in a one-month-period since it was first built in 1983.

Related: The system providing water for 350,000 people hit its limit in May. Now, new protocols are coming

“There’s actually people on this road that didn’t even realize this station was here,” Jack Hogan, Kings Bluff’s superintendent, said. “That’s how low key we keep everything.”

(Author’s note: This is part two of a two-part series. Catch up on part one)

Typically, water demand peaks in July, on and around Independence Day.

While the region’s population swells in the summer and tourists flock to the beach towns, water utility providers keep a close watch on demand figures.

However, this July could be different. Last month, drought conditions — though now slightly dampened by a couple of inches of rain — prompted the highest-producing month for Lower Cape Fear Water and Sewer Authority (LCFWASA) since its delivery pipe was first installed.

Also, the number of people reliant on the regional system is steadily rising. The region has grown by about 19% between 2010-2018, adding nearly 70,000 consumers between Pender, Brunswick, and New Hanover Counties.

A bulk of the tri-county region relies on LCFWASA for its water. And there’s just one man who’s stationed at Kings Bluff full-time, responsible making sure water gets delivered to over 350,000 people.

For over 15 years, Hogan has shown up to work at arguably one of the most important roles in the region. When asked if he’s concerned about demands associated with the Fourth of July — especially after May’s close call — Hogan said it’s “just another day.”

“You can’t let this place get to you. Because if you let it get to you then you gonna fail,” Hogan said.

One part-time operator, Chris Todd, splits his time equally between Kings Bluff and Northwest Water Treatment Plant in Brunswick County. One week on, one week off, Todd helps offset workload and splits on-call time with Hogan at Kings Bluff.

“There’s always someone at this plant on call,” Todd said. Both Todd and Hogan are employed by Brunswick County, but expenses are reimbursed by LCFWASA. Additional hands are not needed, Betz said.

“When I leave out of here, I know she’s running, I know [Northwest Water Treatment Plant] is monitoring, I’m ok,” Hogan said. “There ain’t nothing in this place that gets to me.”

With hundreds of thousands of people dependent on decisions you make, Hogan recognizes (but isn’t phased by) the tremendous responsibility his seat carries.

During Hurricane Florence, Hogan was at Kings Bluff for 12 days straight, fixing broken promises from local fuel suppliers. He said he was trapped at the station, surrounded by water. “We just stayed right here and kept it going,” he said.

As fuel ran low, Hogan found new suppliers, from Apex and Charlotte, whose delivery helped keep water running in the entire Cape Fear region. “Them guys drove through Fayetteville in that flooding to bring us fuel,” Hogan said. “We’ll be doing business with them from now on. Because of the responsibility. Hospitals don’t want to know they can’t get water.”

Schools can temporarily close, Betz said, but you can’t close hospitals. And five hospitals rely on water sourced every day from Kings Bluff.

“We were supplying Wilmington with water when their station was down because they didn’t have no power,” Hogan said, referring to CFPUA’s hurricane water scare. “So yeah, we’re pretty well dedicated to this place. We know the consequences if we don’t get water out of here.”

Nobody wants a TV camera in their face, Hogan said, and nobody watching at home wants to hear excuses. “This place is high priority,” he said. “We don’t skimp on it. We drop everything to get here and resolve it because nobody wants to hear they ain’t getting water.”

Days at the station

Though half of his time he’s alone at Kings Bluff, he isn’t really alone. A long walk down Kings Bluff’s dock will turn up dozens of “presents.”

Nutria (“body like a beaver — but they’re a rat,” Hogan said) hang around in the wetlands. Generations of actual beavers have stuck around to taunt station contractors, who messed with their wetlands in 2010 while installing the second main that runs from the river to the station’s underground storage wet wells.

A 65-pound beaver started the tiff.

“He had a grudge against us,” Hogan said. “He moved in here and he decided he was going to tear this dock down.” 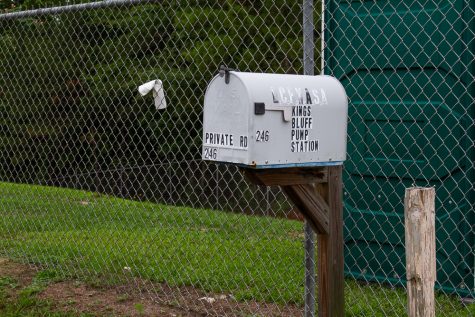 Each side of the Kings Bluff dock is kept clear to make sure the mains can be accessed if maintenance if ever needed.

“He threw like, three trees and it was cute and this that and the other,” Hogan said. “But when he started working on one like this big, I was like, ‘Oh no. It’s time for you to go, bro.'”

Hogan said that beavers grandchildren came back years later. These beavers constructed dam after dam to clog up a canal that had been dug to drain the wetland. The wetland was being temporarily drained so the second main could be installed. Day after day, the beavers sat next to heavy machinery, Hogan said.

Then when it came time to reseed the wetlands, “every turkey in southeastern North Carolina converged down here,” Hogan said. A special $2,000 wetland seed was quickly gobbled up. “They was eating every seed they could find,” Hogan said of the turkeys.

“I was like, ‘Oh man, we’ve got an air leak,'” Hogan said. He climbed down a ladder to check on the leak, and saw a 14-foot alligator, mouth open.

Hogan said the same gator can still be spotted near the station. “He’s been here. This is his hangout.”