Lidl has canceled several planned stores around the state, including one on South 17th Street in Wilmington. But it appears one planned for Eastwood Road is moving ahead.

WILMINGTON — Despite facing uncertainty within the state as well as the City of Wilmington, it appears that German grocery chain Lidl is moving forward with at least one store in the Port City.

Plans for a Lidl store on South 17th Street fell through over the summer with the developer of the property requesting a change to build townhomes instead of the grocery store. But another store located on Eastwood Road is still in the works — along with planned improvements for the heavily traveled corridor.

Lidl purchased the location at 1451 Eastwood Road in 2016, adjacent to the Cambridge Village development. According to city documents, the City of Wilmington is now considering a deal with Lidl to execute some roadway improvements on behalf of the city with the intention of tax money going to services rendered.

In 2014, the City of Wilmington voters approved a transportation bond which has earmarked money for roadway improvements — including Eastwood Road access management improvements.

In an effort to complete the improvements to Eastwood more efficiently, the city has partnered with several private developments already planning constriction.

“Work has begun to improve the look and function of Eastwood Road between Bretonshire Road and Cavalier Drive. This is a voter-approved 2014 Transportation Bond project that has been combined with a privately funded project to better coordinate the work and get it completed more quickly,” according to the City of Wilmington. 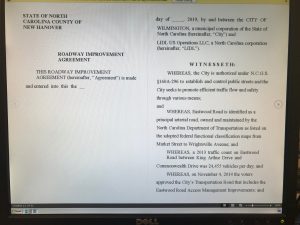 Since Lidl has already planned improvements for Eastwood Road between Cavalier and Town Center Drive the city is considering entering into an $800,000 agreement to expand its scope.

If approved, Lidl would be responsible for providing a median and other roadway improvements between Rogersville Road and Town Center Drive (in addition to what it is already planning).

“When complete in the middle of next year, the project will consist of a new landscaped median between Bretonshire Road and Cavalier Drive, a new traffic signal at Autumn Hall Dr, intersection improvements at Rogersville Road, and a new roundabout on Rogersville Road, where it will connect with Autumn Hall. These improvements will be coordinated with planned developments in the area and NCDOT improvements at the Eastwood/Military Cutoff Road intersection expected to begin within the next two to three years,” according to the city.