Tony Herndon is parking his well-known food trailer to focus on his newest endeavor: a brick-and-mortar counter service restaurant in Boiling Spring Lakes. The restaurant will stay open Wednesday through Sunday and the Joe Loves Lobsters food trailer will still make appearances around the Cape Fear region.

BOILING SPRING LAKES — Inevitably, when Joe Loves Lobster Rolls’ 26-seat counter-service restaurant fills up in Boiling Spring Lakes, its owner Tony Herndon said people will have to get in line outside.

At least there’s seating out there — and soon, a giant, human-sized Jenga game. And a pair of lobster-shaped Adirondacks (yes, really).

The “divine intervention of lobster gods” brought Herndon and his trailer to the region, and it’s the lobster gods who asked him to stay, Herndon said.

“In one year here, [customers have] embraced me so much and stayed loyal,” Herndon said. “This just to me just seemed like a natural place.”

Herndon, who said he believes he is a reincarnation of McDonald’s founder Ray Kroc, said he aims to bring seafood to rural areas that don’t already have a ton of options. His new Boiling Spring Lakes counter service restaurant is his fifth Joe Loves Lobster Rolls brick-and-mortar, but the first franchise.

Herndon said all of his seafood is traceable — Herndon said he can name every captain of every boat that harvests seafood served in his restaurant. The lobster will make it into lobster tacos, a lobster Rueben, lobster rolls (of course), and the Golden Lobster Grilled Cheese. (You can view the menu at the bottom of this article).

Because Brunswick County does not maintain compostable landfill, Herndon is taking every action to minimize Joe Loves Lobster Rolls’ carbon footprint. The steps he’s taking — including using sugar cane utensils and compostable trash bags — may be more costly, but he said it helps provide him peace of mind.

Since word got out and his sign went up at the strip-mall spot, Herndon said at least 20 people a day stop by to ask when he’ll open. “People around here won’t leave me alone. They’re so nice to me,” he said.

Joe Loves Lobster Rolls will have scattered soft openings next week and will open for real on Saturday, May 11.  The restaurant will stay open (roughly) Wednesday through Saturday between 11 a.m. and 7 p.m. On Sundays, it will close earlier, at 4 p.m.

However, given Herndon’s penchant for mobility, customers should check in on the Joe Loves Lobster Rolls Facebook page for daily updates and changes to hours 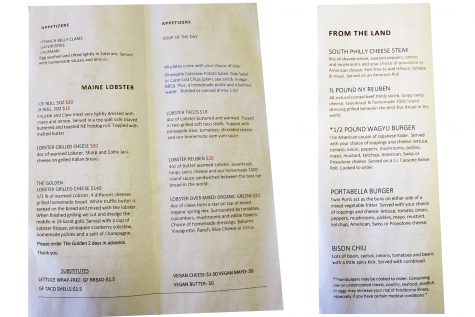