Serving their take on the greatest hits of barbecue, Chef Stephen Durley and wife and co-owner Hayley Jensen opened their doors this week.

WILMINGTON—Skytown Beer and BBQ opened its doors this week. The sister brewery-restaurant to downtown Wilmington staple Beer Barrio is a celebration of the “best of barbecue” from around the American South and Midwest.

The kitchen is turning out what Chef Stephen Durley called a tour of the best regional barbecue culture had to offer: Fried chicken, Texas brisket, Carolina pulled pork, Alabama white-sauce chicken, and – in a nod to Durley’s hometown – St. Louis style spare ribs.

Perhaps surprising for a barbecue restaurant, there are vegan and gluten-free options, including smoked jackfruit with eggplant “bacon.” And, as promised, the eccentric but – according to Durley, very popular – fried sausage gravy.

Skytown’s small brewhaus is hard at work, although the in-house beers aren’t quite ready. In the meantime, the restaurant is serving a selection of local craft beers.

The restaurant is located at 4712 New Centre Drive. Skytown Beer and BBQ is open 11 a.m. to 10 p.m. Sunday through Thursday, 11 a.m. to midnight, Friday and Saturday. For more info, and updates on beers and specials, check out Skytown’s Facebook page.

Below: Check out the menu for Skytown Beer + BBQ, plus their temporary local beer menu 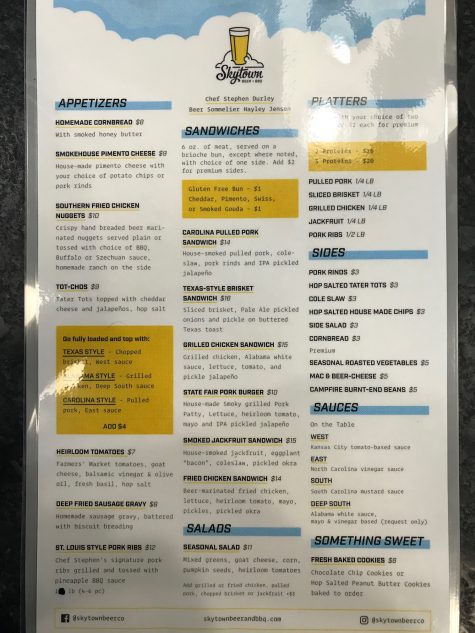