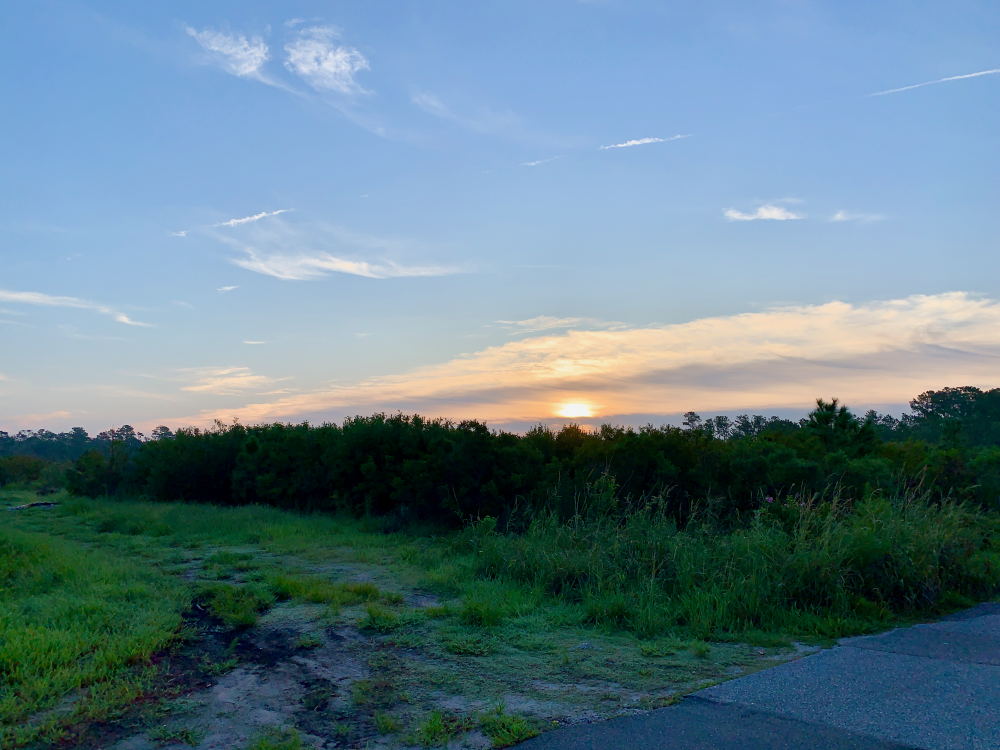 OGDEN — On Monday, New Hanover County Commissioners will hold a public hearing to consider a special use permit for a major mixed-use development on Market Street. Residents of the Ogden neighborhood plan to attend to ask commissioners to slow down, citing concerns over stormwater and traffic — and a previously debated resolution from the county to reconsider the pace of development in the region.

The Middle Sound West development proposed for the 30-acre property at 7241 Market Street will include 288 residential units, as well as office and retail space. Because the area is zoned commercial, Tribute Companies is applying for a special use permit (SUP) to introduce residential buildings; the SUP is for about half of the property. The other half, fronting Market Street, is being reserved for future business development (for which it is already zoned).

The property is one of the few undeveloped parcels along Market Street in the Ogden area. It’s been owned by Coswald, LLC for twenty years, but while Ogden has experienced rapid growth, there’s been little activity on the property since 2005, when a Walmart store was proposed on the site.

Recently passed by the New Hanover County Planning Board, the project now heads to a quasi-judicial hearing in front of the commissioners. Residents who hope to slow the project down plan to attend and make their case, but the format of the hearing will significantly restrict what commissioners will be able to consider.

Development in northern Wilmington and New Hanover County has grown considerably since 2005, but even then, Dexter Hayes, the county’s planning director at the time, noted that “this is a highly congested area along Market St. with traffic movements already failing at many locations,” in a letter to the Army Corps of Engineers.

Hayes’ letter, which also included concerns about disturbing “important wetlands” on the property was included as part of several motions debated by the New Hanover County Board of Commissioners during their July 11, 2005 meeting.

Then-Commissioner Ted Davis put forward a motion that would restrict major residential or commercial developments — those with intense traffic impacts, generating 100 trips per hour at peak times — along Market Street between the Wilmington city limits and the Pender County line.

Commissioners and county staff then debated whether a variety of different ordinances restricting development, rezoning, or the issuance of building permits would be possible. Several proposals were put forward and then withdrawn over legal and logistical concerns, including that even temporary limits could be construed as unlawful moratoriums blocking by-right development and challenged in court.

The Board did unanimously pass a resolution to work with NCDOT and the City of Wilmington to develop land-use and transportation plans.

And, several months later, the Board adopted a resolution to formally express concerns about the proposed Walmart project, including those voiced by Hayes in his letter. Commissioners cited concerns about traffic, wetlands, and a lack of public input on the “cumulative impacts” of the project. The resolution, approved November 7, 2005, stated that there were “more appropriate alternative designs and proposals” for the property, and thus requested a public hearing — because it appears the Walmart would have been a by-right development on commercial property, such a hearing would not have been otherwise necessary.

Walmart, Inc. ultimately opted for a different location, a couple of miles north in the Porters Neck area.

At the risk of understatement, traffic in the Ogden area has not decreased in the last fourteen years.

Rapid development in and around Ogden has put increased stress on Market Street, as well as the roads that do reach into the many Ogden subdivisions. The prolonged closure of Torchwood Boulevard, which was supposed to reopen in late August but remains blocked off, has diverted traffic onto less-well maintained roads like Lendire Road — a relatively narrow road that will bear some of the traffic generated by the Middle Sound West project.

But even when Torchwood reopens, Ogden residents are concerned that these back roads won’t be able to handle the traffic.

Stephanie Walker is a resident who — along with a local group of Ogden neighbors — packed the room at the recent planning board meeting. Walker said that while she doesn’t object to the project’s aesthetics, she and her neighbors are concerned about its overall impact on the region, an area she says is struggling to catch up to years of rapid development.

Walker has been meeting with local representatives (although not county commissioners, who are prohibited from discussing SUP permits prior to meetings), as well as NCDOT officials. According to Walker, NCDOT will now consider Lendire Road, but she knows that any improvements will take time.

“Once you actually see it, it’s not a major road, it’s got potholes, then you can understand our concerns about pushing more traffic onto it,” Walker said. “It’s good to know that it’s on the DOT’s radar now, but we know it will take time [to address].”

Tribute Companies did address traffic concerns in its proposal. While the project will obviously generate more traffic than a vacant lot, the developer demonstrated if allowed to switch from commercial to residential buildings, the traffic impact will be less intense. Compared to the 7,000 to 8,000 daily trips expected from the 2005 Walmart proposal, Middle Sound West is expected to generate 1,833 daily trips.

Walker said she and her neighbors understood this, but hoped the county would still consider slowing down the project to let infrastructure get ahead of the added demand.

Repeated flooding in Ogden developments is the result of many factors, including streams and creeks clogged with storm debris. While the county recently received a multi-million dollar grant to address that aspect of the flooding problem, other factors — including impervious development — are harder to tackle.

“Obviously we had major flooding during Florence, but that was two or three days of intense rain. We had the same kind of flooding after two hours of rain during Durian,” Walker said.

Walker said residents were concerned that no stormwater study of the property had been conducted prior to the approval by the planning board; specifically, Walker said, no one seemed sure which way water would drain off of the property.

According to New Hanover County spokesperson Jessica Loeper, “According to our County Engineer Jim Iannucci, [a stormwater study] would be required of the private engineer during the design phase. The county has identified this area of the county as a priority area and we are seeking Hazard Mitigation Grant Program funds to do a study to determine what is needed to improve drainage.” The county is also considering a new stormwater management utility, which could help address flooding and stormwater issues across the area.

Tribute Companies stated in its application package that its stormwater management system will exceed county and North Carolina Department of Environmental Quality requirements, designed for a 100-year event as opposed to a 25-year event. The stormwater system will also be designed to accommodate the frequent flooding along the property’s border with Market Street.

Walker said that she and her neighbors remain concerned.

“I know they said they’re planning for a 100-year event, but that’s every year now — we’ve had major storms every year. And it doesn’t take a major storm to flood our neighborhood. Again, we just want to slow down and get ahead of development in terms of infrastructure,” Walker said.

Getting heard at a quasi-judicial hearing

Walker said she “learned a lot” from the quasi-judicial hearing in front of the planning board. Despite a room full of concerned residents — who provided photographs of flooding and testimony about degrading traffic conditions — the planning board was restricted to considering a very particular type of evidence. Even planning board members who were sympathetic to the residents’ concerns said they could only vote by the proscribed rules of a SUP hearing.

“It was disappointing, to say the least,” Walker said. “To have a room full, and we all have the experience of living in this area, and knowing what we’re talking about — and to be essentially told by the [assitant] county attorney that ‘our opinion doesn’t matter.'”

Walker says her neighbors now have a better understanding of the SUP process, but she’s not alone in being confused by the process. Several major SUP hearings for mixed-use developments along Military Cutoff Road were the source of confusion and frustration among residents who came to speak in opposition to the project (while these were City of Wilmington hearings, the ‘rules’ of the SUP process are similar.)

Unlike rezoning requests and other hearings, special-use permit requests are considered quasi-judicial in nature, effectively turning the county commissioners’ meeting into a courtroom. Anyone wishing to speak in favor or against the request must be sworn in and can only speak on four different points:

But it’s not enough to ‘stay on topic,’ speakers must demonstrate “competency” and provide “substantial evidence.”

This means anyone opposed to a project and claims permitting it would hurt property values of abutting properties or endanger public health or safety would need proof of this, not just an opinion. For example: residents cannot complain that a project will generate “a lot of traffic” — instead, for their comments to be considered, they must refer to a traffic analysis done by a licensed engineer — or be one themselves. Likewise, stormwater concerns would have to be based on official studies, not anecdotal evidence of past flooding.
Despite the challenges, Walker said she and her neighbors are prepared for Monday’s hearing.
“We’ll have our evidence, and we’ll make our case,” Walker said. “We figure, we’ve got one more shot, so we’ll give it a go.”
The New Hanover County Board of Commissioners will meet at 4 p.m. in the Andre’ Mallette Training Center in the Government Center at 230 Government Center Drive, Suite 135.