Gary Lee Smith was arrested on one count on conspiracy to obtain property on false pretenses. A press conference is scheduled for this afternoon to provide more information.

District Attorney Jon David Announced that Smith and his top lieutenant have both been arrested and the entire Southport Police Department has been put on administrative leave.

SOUTHPORT—Southport Police Chief Gary Smith was arrested today, following an investigation by the FBI and the North Carolina Bureau of Investigation.

Gary Lee Smith, 46, was arrested in Brunswick County today on one count of conspiracy to obtain property under false pretenses.

The Brunswick County Sheriff’s Office has removed Smith’s inmate record from its online inmate database. However, according to an arrest warrant, Smith obtained “U.S. currency, by false pretenses… against City of Southport, North Carolina.”

According to arrest warrants, Smith is also charged with conspiring to allow Southport Police Lieutenant Michael Christian Simmons to work a second job, as well as neglect of duty for allowing it. 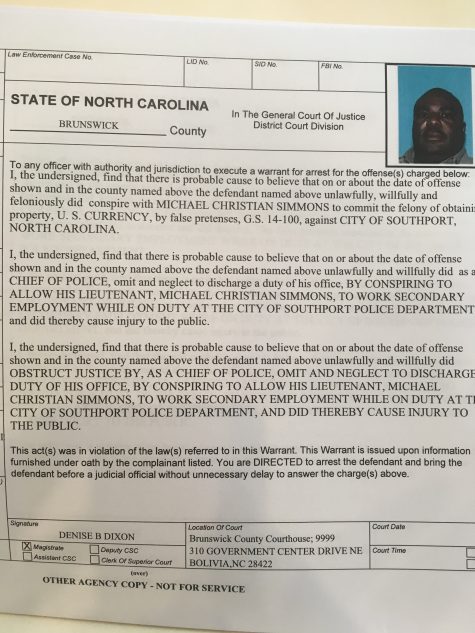 Calls to the Southport Police Department were answered by Brunswick County Sheriff’s Office (BSCO) deputies. According to those deputies, BCSO is handling all phone traffic for Southport PD.

BSCO is also acting in lieu of a Southport Police Chief. When asked why no acting chief had been named by Southport PD, BSCO Spokeswoman Emily Flax declined to comment, saying it was a question for Southport City Manager Bruce Oakley.

Oakley has not yet responded to emails and phone calls.

Brunswick County District Attorney Jon David is holding a press conference at 2:30 in Southport to discuss the arrest and the charge.

This is an evolving story. Port City Daily will have updates live from the press conference and any other information as it becomes available.