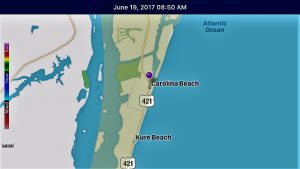 WILMINGTON — Heading to the beach this morning? Be aware: The National Weather Service in Wilmington has issued a beach hazard warning that will be in effect through 9 p.m.

Wind gusts expected to be 15 and 25 M.P.H. and southeasterly waves “will produce a strong longshore current today,” a statement issued early this morning states.

Beach hazard statements are issued when threats, like longshore currents or rip currents, can create “life-threatening conditions” in the surf zone.

“Caution should be used near the water,” according to the statement.

“If caught in a rip current, remain calm,” the statement reads. “Don’t fight the current. Swim in a direction following the shoreline (parallel to shore). When out of the rip current, swim back to shore.

“If tired, float or tread water until out of the rip current. If unable to escape, face the shore and call or wave for help.”

“Inexperienced mariners, especially those operating smaller vessels, should avoid navigating in these conditions,” the statement reads.