SOUTHEASTERN N.C. –– “How much do you want to earn per hour?”

When Wendy Fincher-Hughes, owner of Winnie’s Tavern, asks that question to job candidates during interviews, she often hears back, “I’ll take $7.50,” a whole extra quarter over the 10-year-old minimum wage.

That’s not what they would make at Winnie’s Tavern, she tells them. Everyone starts at a base of $15 an hour at the no-frills, locally loved burger joint off Burnett Boulevard.

“There’s been a lot of discussion over the years about a $15 minimum wage. I believe in that,” Fincher-Hughes said. “I believe that paying people a living wage is responsible as a business owner.”

The owner of the eatery said for the last 10 years she has always paid above minimum wage, and worked her way up to offering a base of $15 an hour, plus tips. But how does she make it work, especially coming back from a pandemic?

“I might be a nonprofit,” she jokes. “But if I keep my staff and keep my business going, then it will come back to us in the future.”

RELATED: Restaurant workers became jobless at the start of the pandemic. Why haven’t they come back?

Some businesses in Wilmington upped their pay and benefits in recent years, in an attempt to reduce turnover and boost productivity.

Now, during one of the worst times for hiring in the hospitality industry, exacerbated by a pandemic, those restaurants that were already offering competitive wages, benefits and paid time off are benefiting themselves with resumes trickling in, as opposed to eateries and bars that are struggling to get a single interviewee through the door, let alone an experienced one.

Despite offering a livable wage, Winnie’s Tavern did lose workers during the Covid-19 shutdown, especially from people making “change-of-life decisions,” Fincher-Hughes said, such as moving out of town or pivoting careers. College graduates searched for opportunities in their fields of study.

Others may be stretching out government benefits such as unemployment and stimulus checks, but not all restaurant owners believe that to be the driving force.

“I think that that’s mildly overblown. The unemployment rate is not much higher than it was before the pandemic right now,” Knight said.

The Benny’s Big Time co-owner added that the current struggle to hire is the worst he’s seen in 15 years of running restaurants, leading him to believe there are various factors at play. Still, the pizzeria has brought on new team members sporadically in recent months.

Benny’s Big Time, which is part of celebrity chef Vivian Howard’s restaurant group, offers a health savings account insurance plan through Blue Cross Blue Shield, a dental care package, 401k and a company match, four days of paid sick leave for all staff (plus some flexibility during Covid-19) and a minimum starting pay of $10 an hour, which varies based on experience.

Knight believes the benefits help retain more so than recruit. He said not everyone takes advantage, especially since many workers are part-time, but those that do stick with the company longer.

Several members of the Benny’s team have remained on ever since, or almost since, the establishment opened three years ago. A couple are approaching the one-year mark, right now.

“The struggle to be profitable in a restaurant is the same whether you provide these benefits or not,” he continued. “Once we learned how to manage our operations to be profitable, adding expenses wasn’t really any different than choosing to buy equipment.”

After being closed since New Year’s, Rx Restaurant and Bar is making arrangements to reopen in the coming month. First, it needs to bulk up its staff.

Owner James Doss said his business was waiting for Covid-19 numbers to ease and vaccines to roll out to reopen. Plus, he took advantage of the time off to focus on renovations, including building a patio with additional seating outdoors.

To begin a search for staff, the restaurant advertised on its Facebook page last week job openings and accompanying benefits, which it has offered for about two years. The post got 80-plus shares. One commenter wrote, “So happy to see y’all stepping up for your staff.”

Doss is already setting up interviews with applicants. He hasn’t needed to turn to Indeed or other avenues of hiring, yet, and is hoping he is able to find all the help the restaurant needs through its social media channels.

“Talking to other friends in the industry, and then seeing articles and stuff, we were a little bit wary, but we have had a pretty good response so far,” he said.

As Rx profits have increased, Doss said he has shared that wealth with the employees, raising pay over the years, as well as its contributions to those receiving health insurance. Plus, the restaurant closes Sunday nights and Mondays, guaranteeing employees a break.

Operating on a slim margin, Doss said offering paid time off is one of the easier ways to appeal to employees and compete with other industries.

This year he is expanding paid time off from managers only to all full-time employees. Once full-time workers reach their one-year mark, they can earn up to six days of paid time off. After two more years at the establishment, they qualify for up to nine days.

Scanning the menu on the first visit to Sweet N Savory, customers will notice the message at the bottom: “We kindly ask that you not leave gratuities as they are no longer accepted.”

Controversially, this restaurant doesn’t accept tips. There’s no gratuity line on the receipt, and any cash offered is handed back.

Instead, Sweet N Savory pays full-time employees an hourly wage of at least $15. According to the note on the menu, it intends on increasing that amount over time, as long as business conditions allow, to $52,000 a year for all full-time team members.

“It’s our responsibility to pay our staff, not our guests,” owner Rob Shapiro said on a phone call this week.

Six months after initiating the policy, Shapiro reports it’s working for the cafe. By “taking away the immediacy of money,” he said the culture is “warmer and kinder and more team-oriented.”

Still, other businesses are doubtful of the management approach. Shapiro admits he faced 100% turnover when implementing the change, as front-of-house staff bid farewell in search of other opportunities where they could keep grinding for high tips.

The elimination of tipping doesn’t deter people from applying at Sweet N Savory as a “hospitality professional,” though. The livable wage, in addition to health insurance benefits, consistently attracts applicants, although candidates are normally from outside the restaurant industry; they come straight out of college or possess customer sales backgrounds or formerly managed an office.

“We’re looking for people who want this as a profession as opposed to a gig,” Shapiro said.

As it rebounds from the pandemic, the cafe is slowly hiring more to keep up with the recent uptick in business. Sales grew 70% in the last six to seven weeks, Shapiro said.

Sweet N Savory doesn’t plan on modifying menu prices to keep up with the $15-an-hour wages, nor does Winnie’s Tavern. Fincher-Hughes said she doesn’t know if her customers would be willing to pay much more than they are now for a hamburger in a dive-bar setting.

Fincher-Hughes can be selective in her search for new team members as Winnie’s Tavern prepares to increase capacity. With $15 base pay, paid holidays and a week of paid vacation each year, she is only bringing on the best of the best. She said if other businesses want experienced people, they’ll need to up their payroll, too.

“You strive to pay people a good wage,” she said. “That’s important for me, as a business owner. I don’t want them to not be able to afford to pay their bills.”

Or earn a house. Fincher-Hughes said she recently answered a call from a mortgage lender in regard to a two-year employee, a Burmese refugee, buying a home. After living in the U.S. for five years, he’d saved up $6,000 for the down payment.

Send comments and tips to Alexandria Sands at alexandria@localdailymedia.com

Want to read more from Port City Daily? Subscribe now and then sign up for our newsletter, Wilmington Wire, and get the headlines delivered to your inbox every morning. 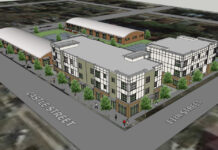