WILMINGTON — Three years ago, artist Robert Johnson began the largest undertaking in his 50-plus year career: painting all 41 state parks across North Carolina to create “Safe Places,” a series of 101 works. Made up of large-scale paintings, and journal and notebook entries of field renderings, the exhibit will open to the public Sunday, Feb. 7, at Cameron Art Museum (CAM).

According to CAM executive director Anne Brennan, it’s a gift to be debuting Johnson’s project. Originally, the series was slated to hang first in Asheville’s Blue Spiral 1 Fine Art + Craft Gallery, but Covid-19 diverted plans. In September, CAM was presented the opportunity to partner with the gallery.

“Safe Places” will be on view at CAM through August 2021. “Then we’ll take it back to the mountains,” Brennan said. “They brought it to us, so we will return it to them — and they will open the exhibit in September.”

Johnson lives in the western part of North Carolina in an area called “Celo Community,” near Penland School of Craft. Sketching and painting the natural world has been his life’s calling. He has camped, hiked and explored areas worldwide, as well as throughout his South Toe River valley home.

Unlike ordinary communities, Celo consists of 40 families that govern 1,200 acres through a land trust, founded in 1937 by Arthur Ernest Morgan. The desire to be a part of a commune settlement arose from the ‘60s when Johnson lived in Berkeley, attended free Grateful Dead concerts, read Carl Jung, and dropped LSD.

“Carl Jung introduced me to the world of my right brain,” Johnson told Port City Daily — ”the world of dreams and myths and magic and stories that connect to one’s inner world.”

This heightened awareness expanded his views and art, which was influenced at the time by San Francisco pop, minimal and figurative artist William Wiley, as well as Robert Motherwell, Jack Tworkov, and Larry Poons. Johnson served an apprenticeship with Karl Knaths and was a part of an artist critique group with Mark Rothko.

Johnson criss-crossed the East and West coasts a few times, graduating from Louisville of Kentucky before moving to Oakland to attend grad school at Mills College. He then moved to Provincetown, Massachusetts, to teach at Roger Williams University. Once Johnson realized teaching wasn’t his forte, he and his wife found Celo, fell in love with the North Carolina mountains and began their family. Johnson also pursued a career as a full-time artist, selling his work to fund travels for inspiration.

Travel was a part of Johnson’s upbringing in Caracas, Venezuela. His father often took him and his brother on camping trips near the lagoons in the Llanos plains.

“He was pretty much an adventurer and really enjoyed being out in nature,” Johnson said.

As an adult, Johnson has painted and studied in Ecuador, New Zealand, Costa Rica, Cuba, and Tasmania, as well as learned about traditional art in Jaipur, India, Kathmandu, Nepal, and Ubud in Bali, Indonesia. His work is punctuated by late medieval Italian, American Folk, Indian Miniature, Tibetan Thangka, and Balinese traditions.

“The approach to my art is not typically western, as you would see in traditional landscape painting that is influenced by a realistic approach,” Johnson said.

He doesn’t merely paint scenes that can be absorbed from photographs; instead, he punctuates them with surrealism, details of folk art and tribal pattern-making. Some of his works look like individual fairytales, though he has referred to them as “little prayers.”

“Whereas a deist, in most Christian religions, is somebody that believes that god created the world, there’s sort of a separation between god and the world,” Johnson explained to the curators at Blue 1 gallery. “For me, there is no separation. Whatever we have in the natural world is sacred. And so connecting with that, I think, is really what’s behind my big draw to go out and sketch . . . That’s why I make paintings — they’re almost like prayers.”

When Johnson decided to pursue “Safe Places” in 2018, he packed up his camper and his dog Molly (who appears in some of the works) to trek across the 41 state parks in North Carolina. He catalogued flora and fauna and creatures from the mountains to the piedmont to the coast.

“I learned the identity and natural habitat of many plants and animals I hadn’t known before,” Johnson said.

Viewers will see intricate paintings of lush foliage and critters, like a barren frog in Carolina Beach State Park, a Saint Francis satyr butterfly from the sandhills, and the purple bladderwort from the eastern part of the state.

“I became acutely aware of the mood of different environments; feeling and recording the mood of a landscape is just as important as recording what I see,” Johnson said.

CAM’s Bob Unchester curated the show to move through the gallery east to west as well, capturing the same spirited journey. The work starts in Bay Lakes and moves toward Hanging Rock, the landscape in every piece shifting.

“The artwork wants to be here,” Unchester said, “and it really designed itself in that sense. It wanted to move this way, and that’s why it gets so much larger toward the west where Johnson lives — and the colors intensify.”

Though Johnson said he finds more inspiration in the mountains than the beach, his favorite stop as part of creating “Safe Places” was Carolina Beach State Park. He spent a week learning about its ecosystems, from marshes and ponds, its indigenous Venus flytraps, to Turkey Oaks and longleaf pines, as well as 20 species of frogs.

“The more different worlds, the more there is to paint,” Johnson said.

CAM has permanently acquired “Carolina Beach State Park,” as well as three of the journal sketches that illustrate Johnson’s process in creating the painting.

“I enjoy doing the journal paintings the best because they don’t take up too much time, and I can get out of the studio and into the woods faster than if I had to paint a large one,” Johnson said. “Getting out to sketch and coming up with new ideas is my favorite part of the process.”

Johnson works on his art six hours a day. He completed “Safe Places” in three years — 6,000 hours. Though the output for the 76-year-old may seem intense, it’s part of his voyage toward inner peace.

“I have always loved being out in nature,” he explained. “I had experiences of losing myself and of feeling a sense of expansion. My painting life is a way for me to immerse myself in this experience, and try to communicate this sense of wonder and gratitude at the beauty we find there.”

According to Brennan, Mount Mitchell had one of the earliest weather-recording machines in the state and has tracked evidence of snow at its 6,684-feet peak 12 months a year during some years.

“I thought Robert was just being, you know — he can do anything he wants, he can combine seasons,” she said of his painting, pointing to flowers blooming and wild blackberries and strawberries growing as snow falls above. “But this could truly be a tiger lily blooming at Mount Mitchell in the snow.”

Johnson’s enchanting approach to the outer world is intentional — a mix of whimsy and realism that manages to be all-comforting. But that’s how “Safe Places” came to be to begin with. The idea was born from turbulence, inspired by a phrase his 7-year-old granddaughter spoke in 2016 when Trump was elected. Johnson recalled her saying, “I don’t feel safe.”

Who knew a pandemic and civil unrest would be on the way to certify such sentiments? Thus Johnson’s series arrived in the nick of time.

“The world felt ungrounded,” he said. “I started working on this project and felt a great sense of quiet and calm while exploring the natural world in parks around home. I was experiencing places we can go to get a respite from all the turmoil in the world. We can get out into nature to feel reinvigorated and comforted and cleansed.”

Want to read more in-depth reporting from PCD staff? Subscribe now and then sign up for our free newsletter, Wilmington Wire, and get the headlines delivered to your inbox every morning. 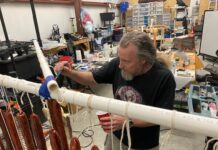 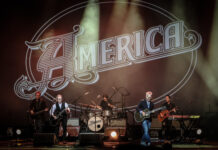 ‘We were never a heavy metal rock band or wanted to be, frankly’: America tours through Wilmington for 50-year anniversary