WILMINGTON — A photo shrine to Alvin Lee Tindall, known as “Truck” from his football days, hangs on the back wall of Truck’s Chicken ‘n Fish on Red Cross Street in downtown Wilmington.

His sister, Romona Ragin, better known as Mama Mona, took a seat at a table by the front window after another busy lunch shift just ten days after opening. She said when her brother died of a heart attack in Florida, she decided to renovate the building she had used as a community soup kitchen since 2015 and open a restaurant dedicated to her brother.

“I wasn’t making no money, I was just feeding people for free,” Ragin said. “This is all we know, is food. When I got back to Wilmington I wanted to do something to keep my brother’s name going. He was such a great cook; he fried the best fish and chicken.”

She said her mom, now 91, taught both of them how to cook, and the two siblings would compete over who could make the best fried chicken and fish. At Truck’s, she said the chicken is her recipe while the fish is her brother’s.

Ragin, who is a minister at a nearby church and runs a nonprofit called Help A Sista Out (HASO), said the low prices on her menu was a goal from the beginning.

“For $10 you can come in here and get five wings — and my chicken wings are big — and a homemade side,” Ragin said. “You know, we just got hit by a hurricane. There’s still about 3,000 people who are homeless in this city; people strugglin’ at the gas tanks; a lot of buildings completely destroyed. So people’s out of work, people looking for work. And we gotta eat to keep livin’.”

She said one woman came in on Saturday with four kids. She had ordered each a kid’s meal and, for herself, the Truck Special — three wings, a side, a roll, and a drink — all for $19.26.

She also runs the restaurant as a family affair: her husband, sister, both daughters, a nephew, and two nieces work behind the counter or in the kitchen. Even her mom wanted a piece of the action.

Tim McMillon was in for the first time, eating chicken wings across from his brother.

“It’s good man,” McMillon said. “The chicken is good, the customer service is good, it’s fast, and it’s local. It’s right down the street where I stay from.”

Click on the image below to view their menu: 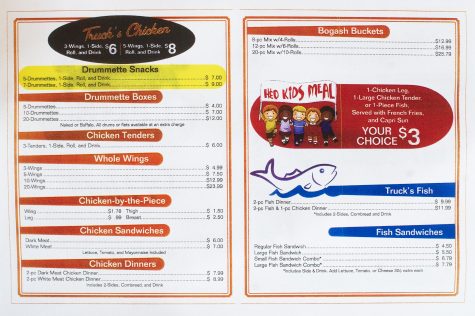