WILMINGTON — Over the weekend, the city’s new “black lives do matter” art exhibit was erected in a space adjacent to Jervay Park, visible from Third Street.

Local artists contributed their work letter by letter, reflecting on the city’s ugly racial history and recent events in a post-George Floyd era.

First proposed as a “black lives matter” street mural, the concept morphed into its current form to distance the message from the official Black Lives Matter organization, including an “end racism now” sign. Council approved the temporary one-year art exhibit in a 5-2 vote on Aug. 18, with Niel Anderson and Charlie Rivenbark dissenting.

Both said they felt it wasn’t appropriate for the government to adopt this type of speech. Mayor Bill Saffo said the issue was the most divisive and heated issues he’d ever seen as mayor. 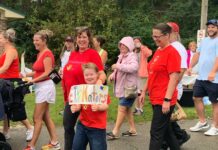