Wilmington betting on ‘value engineering’ to reimburse $892,850 to be moved from parking fund to River Place

WILMINGTON — The City of Wilmington has to get creative once again when it comes to paying for its flagship public/private development known as River Place and surrounding improvements — like taking money from one project to pay for another.

City staff is asking City Council to let it take money out of the city’s Parking Fund to help pay for the elevated walkway from Bijou Park to the development.

The walkway had already been budgeted for but, according to Deputy City Manager Tony Caudle, the city had to take money out of the walkway project to pay for Riverplace cost increases.

“We currently anticipate the project cost to be about $1.425 million, this is the elevated walkway behind the building that connects Bijou Park to the project … The initial budget as currently allocated is about $800,000. Oddly enough this is another place that we moved money when we ran into the cost allocation issues earlier in the project. We actually moved some money out of the elevated walkway into the River place project,” Caudle said to City Council Monday.

Now that River Place is on track and the walkway project is ready to get underway, the city once again has to shuffle some money to pay for its newest venture.

From here to there 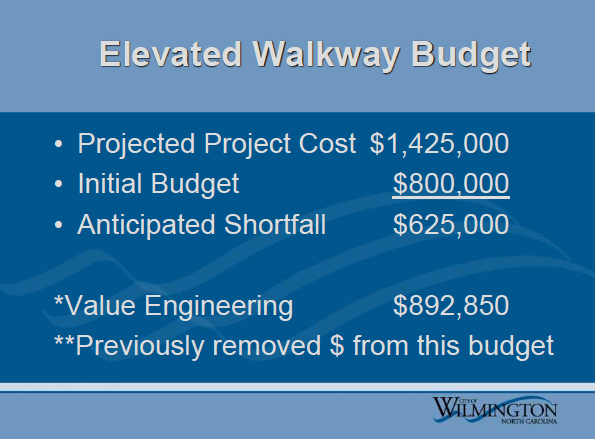 So where would this money come from?

Caudle asked the council to consider moving nearly $1 million from the city’s Parking Fund to help cover the cost and to enter into an agreement with the developer of River Place to construct the project — for the price of $1.425 million.

“Under this amendment, River Place has provided a construction cost and will complete the construction of the improvements as per the goals of the capital project, and the City will provide reimbursement for construction for an amount not to exceed $1,425,000 without prior approval from the City,” according to City Council’s upcoming agenda.

But this would not be a complete loss for the parking fund, in fact, Caudle said the money saved from value engineering the River Place project will pay back the parking fund — of course — once that project is complete.

(Note: ‘Value engineering’ typically means finding less expensive components or materials for a project without altering the overall design — for example swapping synthetic panels for hardwood, or using less elaborate fixtures, etc. Some council members have expressed concerns over the process, but at River Place and North Waterfront Park, saying the quality of the projects could be reduced too much.)

“The companion appropriation ordinance provides for an advance of funds in the amount of $892,472 from the Parking Fund to the Capital Construction account for some of the cost of the improvements. The Parking Fund will be reimbursed by the project at its conclusion,” according to the resolution.

So why not just allocate that money that would be saved into the walkway project? Well, since the project has not yet been closed out numbers still could change. This means that while the city hopes it will save this amount from value engineering, as seen with this project in the past, anticipated costs are not always reliable.

“We would have to go back to replenishing [the fund]. We do believe it is healthy enough to sustain that if we had to, we don’t anticipate that to be an issue,” he said.