Local elections affect residents more than any other election yet voter turnout is abysmal compared to even-numbered election years --- but the City of Wilmington has no desire to switch its system to fall in line with federal elections.

WILMINGTON — There are nearly 85,000 registered voters residing within the municipal boundaries of the City of Wilmington, yet in 2017 less than 13% of eligible voters actually participated in electing local leaders.

“Currently, there are 84,217 registered voters who reside within the municipal boundaries of the city of Wilmington,” Rae Hunter-Havens, director of the New Hanover County Board of Elections said.

It’s not atypical to see a smaller voter turnout during odd-numbered years; for example,  during the 2018 General Election 89,403 out of 172,566 voters in New Hanover County exercised their right to vote, a 51% turnout. During the 2016 Presidential Election, 112,588 out of 169,930 voters made it to the polls — so the data shows a significant decline in voter participation in municipal elections. 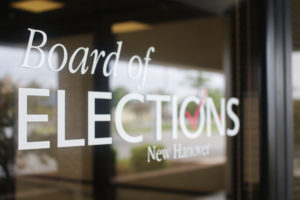 Obviously, there will be fewer voters for municipal elections since residents must reside within city or town limits in order to cast a vote.

In the past, the City of Wilmington has fought at a state-level to ensure that municipalities were not required to hold elections during even-numbered years.

Assistant to the City Manager for Legislative Affairs Tony McEwen explained to City Council in the past that keeping municipal elections on odd years was something he advocated for with legislators.

“This is a system that has been in place all this time, it has always worked, council would question some of the motives of making this change at this point … Local governance and elections are just different, it is not a partisan thing … I find that local government is very serious government, it’s where the rubber meets the road, nobody is sitting here talking about who is democrat or republican — this is about getting your trash picked up, this is about making sure police officers respond to emergencies,” he said in a previous interview with Port City Daily.

For McEwen, it all comes down to local control over state regulations.

“Our legislative agenda has longed championed local control over local issues and municipal elections are no different. The City believes that decisions related to local elections and local authority, in general, should be left to those that are duly elected to local government positions,” he said.

It also comes down to the chance that local issues will not be as important to voters as national issues and therefore be lost amongst the national concerns.

“There is great concern over the strong likelihood that local issues and local campaigns would get crowded out during national elections. We feel that the less attention to local issues would a less involved and informed electorate. Local candidates would likely find it much more challenging to have their campaign message break through due to increased advertising costs during national election cycles due to the proliferation of dark money advertisements associated with national and statewide campaigns. Lastly, national and statewide campaigns often garner the most attention from potential volunteers and campaign staff resulting in further to local candidates,” McEwen said.

When it comes to the obviously lower voter turnout during odd-numbered years, McEwen said it’s not up to the city to control voter turnout — even though even-numbered year elections would ensure more voices have a say in their local politics.