Survey: Residents think Wilmington is a great place to visit or live, not the best for work

For the first time since 2007, the city’s satisfaction rating amongst residents has dropped below the baseline of 100 to 99. It peaked in 2015 and has been on the decline since then.

WILMINGTON —Traffic congestion, road maintenance, and the quality of police services are just a few of the ‘priorities for improvement’ in the City of Wilmington according to a recent citizens survey — but despite these areas of concern, 83% of respondents have a positive perception of the city.

On Monday, City Council heard from ETC Institute, the organization responsible for conducting the survey; this is the sixth time the institute has conducted the survey for Wilmington.

The survey got the opinion of 833 residents with fairly representative demographics from all age ranges, genders, and ethnicities. 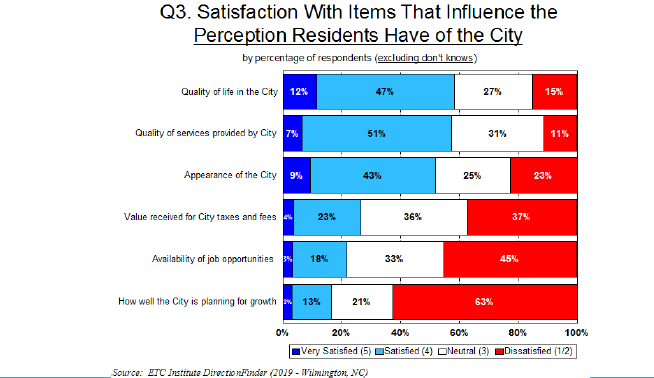 Despite common complaints by residents at City Council meetings and on social media, the city’s residents actually ranked Wilmington higher than the Atlantic Regional Average and 8% above the country average for quality of services.

But with the good comes the bad, and the survey showed 63% of respondents are dissatisfied with how well the city is planning for growth. On the other side though, 59% of residents are very satisfied or satisfied with the quality of life in the city.

A place to visit, a place to live 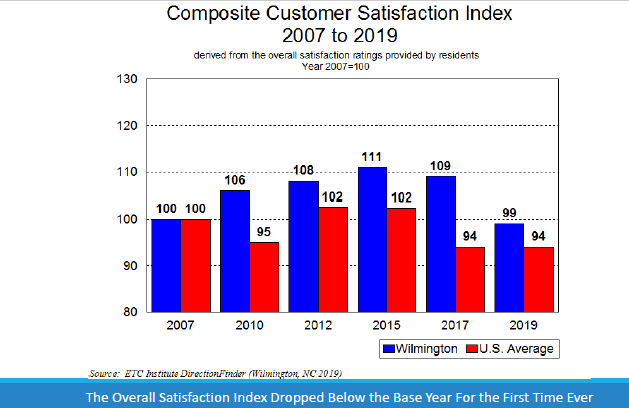 Residents were asked to also rate the City of Wilmington in several categories including as a place to visit, live, retire, raise children, and to work.

A place to visit and a place to live took the one and two spots respectively, while only 52% of respondents think Wilmington is a good place to build a business and work.

This is also the first time since 2007 that the resident satisfaction index dropped below the base year, according to the survey results.

Notable decreases and increases in satisfaction in the long term were also tracked by the survey.

The decrease in satisfaction included:

The full survey results presentation can be found in the document below.