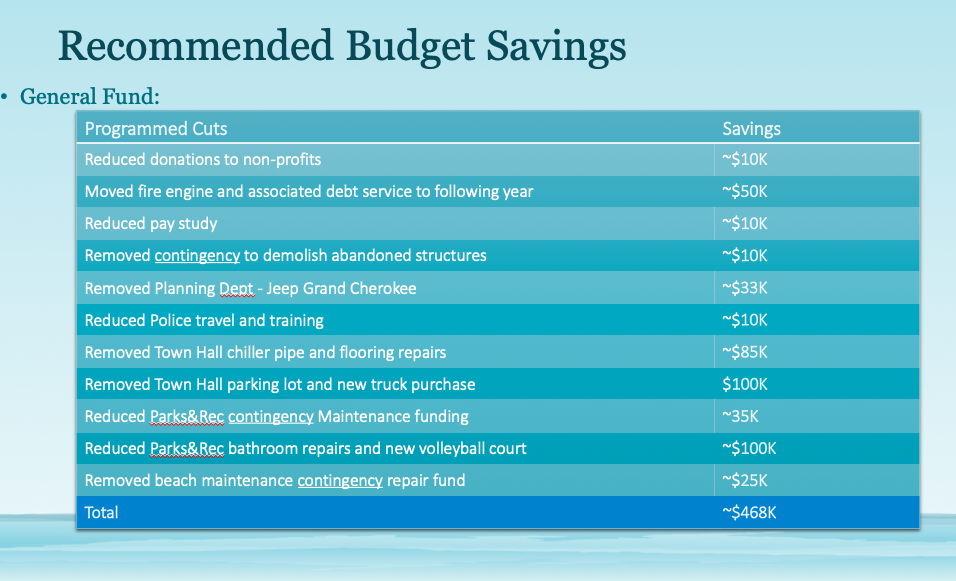 A two-cent increase in property taxes is being recommended by town staff along with a 10% increase in water and sewage fees to help balance the town’s budget for the upcoming Fiscal Year 2019-2020.

CAROLINA BEACH — Taxpayers in the Town of Carolina Beach are likely looking at multiple increases this year for both taxes and utility fees for water and sewer to help balance the town’s Fiscal Year 2019-2020 budget, which will go into effect in July.

If approved, the current recommended budget for the town will see a two-cent increase in property taxes and a 10% increase in water and sewer rates.

So what does this mean in terms of dollars?

According to a budget presentation made by Town Manager Lucky Narain, the average water/sewer bill would increase by nearly $7 a month; stormwater fees would also see a $1 increase per residential unit.

But increasing revenues is not the only way the town is planning on rebuilding its general fund balance and balancing its budget this year, town staff is also recommending several budget cuts including cutting several positions from payroll.

According to the presentation, the budget would eliminate the “Admin II position,” an intel officer, and three police officers due to organizational restructuring. The town would also reduce merit increases to 1% and cost of living adjustments would be 3%. By making these adjustments the town would save $332,235 in the upcoming fiscal year.

The proposed budget would also cut funding to multiple non-profits that the town has history supported.

While some nonprofits, like the senior center and Carolina Beach Inlet will retain their fully requested amounts, others were not as fortunate.

Proposals for non-profit cuts, as seen in the chart above, completely eliminated $5,000 to the Steve Haydu St. Patrick’s Lo Tide Fund.

Other recommending savings for the town’s general fund include removing vehicle purchases, reducing police travel and training, and cutting down on spending in the parks and recreation department.

With these savings, Narain said his goal is to put back at least $100,000 into the general fund to help replenish the previously declining balance.

Overall, the total budget for the town comes out to be $24.9 million, which is only slightly higher than the budget for $24.5 million for the current fiscal year.

The Town Council will vote on approving the proposed budget at an upcoming June council meeting.

Send comments and tips to michael.p@localvoicemedia.com