Slice of Life, Starbucks, retail, apartments, and a hotel all underway in Ogden-Porters Neck area

A development update on the rapid growth in the northeastern part of the county along the Market Street-Highway 17 corridor.

Beginning around the intersection of Military Cutoff Road and Market Street, new construction is planned or already underway for multiple parcels in the Ogden and Porters Neck areas.

In April of 2018, the New Hanover County Board of Commissioners approved plans for retail and office development located on Market Street and Bump Along Road.

The plans call for the development of a two-story, 11,800-square-foot building and a 3,000-square-foot one-story building on the site. The request would allow for 10 different uses for the buildings. Those uses include restaurants; general merchandise stores; miscellaneous retail; banks; barber shops; office space; and business services, like printing, dry cleaning, indoor recreation, and personal services.

In May of last year, Port City Daily got ahold of a traffic impact analysis completed and submitted to the Wilmington Urban Metropolitan Organization for review for the development of an Ogden Starbucks.

According to the report, the buildout was planned for 2019.

County building activity tracking maps show building permits have been issued, and some are in review and ready to be issued for the property located at 7201 Market Street. These documents reference Starbucks directly so it appears plans are on track.

Construction is underway for phase two of a nearly 600-unit apartment complex on Market Street at the former location of Jones’ Fish Camp.

The apartment complex, when complete, will consist of 42-acres — but phase two is less than 16-acres in size.

Trees have already been cleared from the property and work appears to be well on its way.

Slice of Life Pizza, a hotel, and more

Near the Porters Neck Lowe’s, new construction is underway for several new developments. Slice of Life Pizza is already under construction along with several other outparcels that have not yet been named. 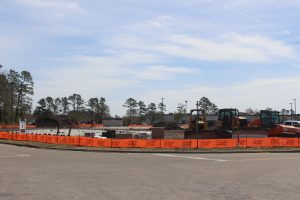 Directly across Porters Neck Road (and behind the Port City Java) a large area of land has been cleared to make way for the area’s first and only hotel. It is still not known what the hotel brand will be at the location but it will sit on nearly 4-acres of land.