WILMINGTON — When it comes to championing for affordable housing few groups in the region are more vocal and present than Cape Fear Habit for Humanity. There are plenty of misconceptions surrounding the nonprofit organization Habitat for Humanity; people often think the group provides homes to the homeless or offers free homes to those in need — but that is far from what actually happens.

Habitat for Humanity does help families in need to become homeowners, but these are not just free houses given away.

Home recipients are expected to pay a mortgage and also contribute “sweat-equity” by working alongside volunteers in building their home.

One of the requirements for receiving a Habit home is the “ability to pay a mortgage: we build single-family homes for anyone who earns 30-to-80-percent of the area median household income, with a target AMI of 60 percent or below. The houses are purchased by the families through an affordable mortgage from Cape Fear Habitat for Humanity.”

But fulfilling its mission of providing affordable housing in Wilmington has become a struggle over the past few years, according to Cape Fear Habitat for Humanity’s Executive Director Steve Spain.

It’s no secret that the housing stock in Wilmington and the region as a whole is being rapidly depleted, but thanks to high land costs, developers are building more and more high-end housing while simultaneously removing affordable units through redevelopment projects.

Perhaps this is best seen with the loss of mobile home parks in Wilmington. Multiple mobile home facilities have been closed or marked for demolition to make way for luxury apartments and mixed-use projects.

“I think the situation has just gotten worse … two of those large projects replaced what was affordable housing. It might not have been the greatest luxury affordable housing, but that continued loss of mobile home parks has really set us back,” Spain said.

It’s not just lower-income residents that have been forced out of Wilmington, Habitat itself is having a harder time finding land to provide homes.

“As an agency, we feel forced out of Wilmington to find land we can afford … we don’t need to make a profit, but we can’t lose too much on every house because we depend on donations to make that difference. As the prices for land have risen in Wilmington were doing more and more in parts of the county and focusing more in Pender County,” he said.

Spain said Habitat for Humanity has been building 12-15 new houses per year for the past few years but following Hurricane Florence, he wants to see that number increase.

“A large number of the people who lost their apartments were again, low to moderate income folks, and nobody is building new apartments at that price range,” Spain said.

Since the storm, Cape Fear Habitat for Humanity has added repair program for people who have had their homes gutted due to the storm. The agency will utilize FEMA or insurance funding is it is available to help complete the repairs, provide interest-free loans, and if they can not afford that, they will just do the work for free.

New homes on the way 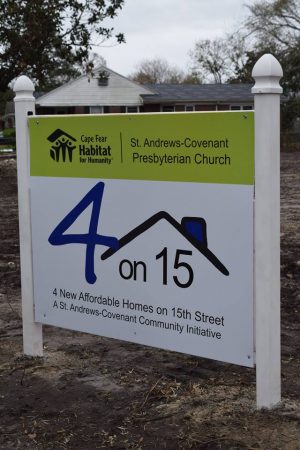 Prior to Florence, Cape Fear Habitat had been planning a 27-unit neighborhood off Gordon Road in New Hanover County but had essentially stalled due to the high costs of providing infrastructure.

“We’re going to pay $150,000 in fees before we can sell a house before we finish getting the dirt flat … We kinda got stalled out because it’s so expensive right now to do infrastructure but after Florence, we just decided ‘okay, we’ll lose a little more money.’ The infrastructure there, road, water, and sewer should start within the next month,” Spain said.

Each house will sit on about 12,000-square-feet of land, but the homes themselves are typically only 1,200-square-feet Spain said.

One of the challenges Spain has been facing for years now in New Hanover County is that of WAVE Transit and it’s cyclical routes. Looking at a WAVE map, bus routes only go one way.

“I forget which it goes there on Daniel Boone … if you have a job at Mayfaire you would have a 10-minute bus ride home from work, and about an hour-and-a-quarter getting there. You almost could literally walk it faster than the bus,” Spain said.

When it comes to the City of Wilmington and New Hanover County elected leadership there has been plenty of discussion surrounding affordable housing — but little has actually been done to help alleviate the problems.

Perhaps one of the most obvious instances of this is the Military Cutoff corridor.

Related: The domino effect: Rezoning requests on Military Cutoff continue to come in

City Council last year approved several mixed-use developments, all of which are planning hundreds of new apartments but only one developer offered to include affordable housing.

“The one exception that really deserves calling out is Tribute Properties and they were the Atrium developments. They voluntarily came forward and offered 10 percent of their apartments to be affordable. That is part of their approval with City Council,” Spain said.

It’s not just up to the government

While there is a responsibility placed on elected officials, Spain suggests private entities also work towards the same goal.

For example, Spain said a lot of the big tech companies on the West Coast will often provide housing for their employees — but that idea has not really made its way here.

“You have the high tech people doing what mining operations and agricultural ones have done for a couple of centuries which is, ‘well if we need workers we have to house them.’ But people here just don’t seem to think about that,” Spain said.

The lack of workforce housing is detrimental to the city as a whole when it comes to competitiveness.

“I don’t think we were ever a serious applicant, but when you look at something like the Amazon expansion, that is one of the huge things they look at. Do people want to live there and if they do, can they afford to live there?” Spain said.

There is no quick fix for the affordable housing crisis in Wilmington or across the country, but Spain believes there are a few steps both New Hanover County and the City of Wilmington can take right now to help.

“I’d say right now probably the most effective thing would be appropriate changes to the UDO (Unified Development Ordinance) both the city and the county are looking at that now and they are conferring with each other to try and be consistent. If they took into account ways to make building affordable housing as profitable, or at least within reach, as higher cost housing in those ordinances. That would be a huge plus,” he said.

Well, if you look at the current R-15 zoning districts you have to have 15,000-square-foot lots. But Spain argues that this type of zoning prices affordable housing out due to the high cost of land.

What he would like to see is essentially a higher density allowed in different areas thus making it more practical to include lower-priced homes in new developments.

For those who would argue that affordable housing would ruin an area, Spain said the main distinguishing feature is that the homes are smaller — nothing else.

Ultimately, it will come down to a mixture of public and private collaboration if there is to be a solution to the housing crisis the region and country are facing.