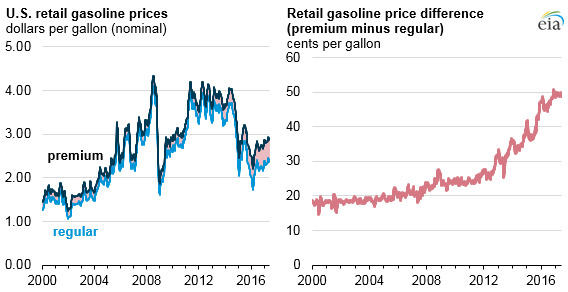 The engine design changes to increase the fuel economy of the small trucks that are all the rage on Cape Fear are boosting the demand for premium gasoline, increasing the price difference between the high-octane blend and regular gasoline.

The Energy Information Administration found the difference between U.S. average retail prices for the two grades reached .50 cents per gallon in late 2016, adding it has remained near that level so far in 2017.

The Department of Energy agency is taking a look at this growing spread during next week’s 2017 EIA Energy Conference in Washington DC. An examination of the market forces fueling the spread will be the focus of a session during the June 26-27 conference.

One of the main performance characteristics of motor gasoline is octane, a measure of gasoline’s resistance to spontaneous combustion.

The price spread between the two grades of gasoline is most often representative of the cost to produce the additional octane, the EIA noted.

On the demand side, the premium gasoline share of total motor gasoline sales has steadily increased in recent years, reaching a high nearly 12 percent in August 2016—the highest share since 2004.

Given 2016’s record gasoline consumption, 12 percent represented a lot more gasoline last summer than it did a dozen years earlier.

Although lower gasoline prices may be making premium gasoline more affordable, the EIA said, the upward trend in premium gasoline sales is more likely driven by changes in fuel requirements for light-duty vehicles in response to increasing fuel economy standards.

To meet these standards, it noted, more car manufacturers are producing models with turbocharged engines that may require or recommend the use of high-octane gasoline.

This long-running trend has occurred at the same time as costs to produce and supply octane for gasoline have increased, resulting in an increasing price difference, or spread, since 2000.

Energy policy reforms in recent years have promoted the widespread use of ethanol as a source of octane in gasoline, replacing previous octane sources such as tetraethyl lead and methyl tertiary-butyl ether (MTBE).

However, there is limited demand for — and challenges associated with — blending ethanol into gasoline in concentrations greater than 10 percent, the EIA said. The result, ethanol inputs as a percentage of total gasoline consumed approached 10 percent in 2013 and have since plateaued, even as the demand for higher octane blends increased.

The combination of increasing demand for premium gasoline and market challenges to further increases in ethanol blending has led refiners and blenders to acquire more expensive sources of octane, leading to an increase in the price differential between premium and regular gasoline in recent years.

Submitted by Jim Brumm, for more from Jim, visit his Energy Thoughts blog

This content was provided by a community member via Local Shout, a new initiative at Port City Daily. Port City Daily cannot guarantee the accuracy of information presented in this story. If you have additional information or would like to submit a story, please contact shout@portcitydaily.com.

New allegations say commissioner took $118,000 from joint account with wife days after a judge found her in contempt of court

1898 teachings in NHCS part of revised education standard on revolution, reform and resistance