LELAND — Fans of Southport Smokehouse won’t have to drive far for a Texas-style brisket sandwich.

The BBQ restaurant has opened its second location in Leland, where the smell of hickory smoke can be picked up even from Highway 17.

Despite opening in the middle of a pandemic in a new location, Troy Knight, owner of both smokehouses and pastor of Generations Church in Southport, said Leland Smokehouse has been slammed with take-out orders.

“A couple times this weekend we had to just turn off online orders and not answer the phone,” Knight said Wednesday. After opening June 23, Leland Smokehouse has been a hit in northern Brunswick County just off to-go orders alone. “It’s been great. The people of Leland have definitely responded.”

After opening in 2014, the restaurant developed a loyal fanbase, with Wilmington customers known to make the 45-minute drive down to Southport for a taste of the smoked brisket.

Originally from Texas, Knight was turned off by his first North Carolina barbecue, which was drenched in vinegar. “I was like, what is this mess?” he said.

Brisket is served either lean, moist, or mixed, in half-inch slices or pulled in a sandwich. Smoked ribs covered in a pepper and sugar rub fall off the bone.

“It ought to be moist enough and smokey enough where you don’t even need sauce – it covers up the great flavor,” he said. We are unique among North Carolina barbecue restaurants in that we serve everything with a dry rub. We don’t sauce anything.”

Daniel Crouson, six-year general manager of the Southport location, is now heading up the Leland location. “It’s been crazy. I was expecting to be very busy but the amount of to-gos at one time has been so crazy.”

Open daily between 11 a.m. and 9 p.m., Leland Smokehouse is located in the Waterford shopping center in the former Fat Tony’s location.

[Editor’s note: Knight’s opinions on Eastern NC style barbeque are his own and do not necessarily reflect the views of Port City Daily.] 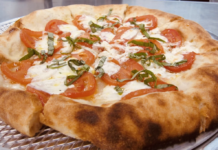