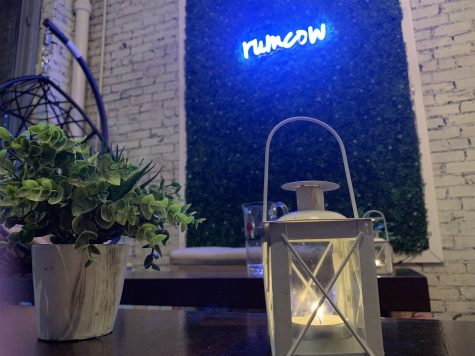 WILMINGTON — There’s a pervasive, but largely unfounded, urban myth that restaurant specials are an underhanded way to get rid of older product. In the kitchen at Rumcow, in downtown Wilmington, new head chef Andrew Hunn is working to show just how far from the truth that myth really is.

The restaurant has been open for a little more than a year now and is known for its eclectic menu, something that owner Joe Sena has described as ‘Southern chic,’ that is, Southern cooking with an international flair.

From tater tots dressed with an Asain sauce and jalapenos to goat cheese queso dip, you’re likely to see something you recognize on the menu, albeit, with a new take.

And while these items have been popular with customers, Sena and Hunn are changing the way Rumcow does things (but for the purists who appreciate the menu as it has been don’t worry — your Rumcow favorites are still available).

What is different is the addition of the new weekly specials and a new focus on street foods from across the world.

“What we were really looking for when we first opened this place was doing weekly specials that focused on world cuisine. We already have an eclectic menu that we have persued but what we really wanted to start chasing down were those small-batch world recipes,” Sena said.

But it’s not just customers who are getting a chance to try new things, Rumcow’s Hunn is running what some would describe as an experimental kitchen.

“It’s a lot of fun because I’ll do research and I’ll see a street food from around the world that I have never had before and it’s like, okay, let’s see how we can have fun with this. There is a good chance that a majority of our diners have not had it as well so we have been able to do some really cool things and put our twist on it,” Hunn said. “Our only rule is, it needs to taste good.”

“It’s a lot more fun to cook that way too,” Sena added. “That’s why we like this kitchen I think that is the premise of this kitchen, to be experimental and try different things, to use the resources. We don’t have any strict guidelines.”

While he is the head chef, Hunn works with his kitchen team, as well as with Sena to bring new ideas and recipes to life.

“When we get something unique like the bao bun (a type of Chinese steamed bun) it gives us time to figure it out as we are going. We are pretty open-minded and I think that helps get the best out of the team, having four different perspectives on the same ingredients,” Hunn said.

The old menu, which actually changes every few months, is still available but the focus has turned to these weekly specials. Each week Hunn works to put out three new specials, a tall order at times, but for Sena, it’s worth it to give diners a chance to try new things.

So far Sena said the reception to these specials has been overwhelmingly positive and for some of them, they are gone by the first day of their debut. But it’s not as simple as running to the store to replenish the ingredients since much of the produce and other ingredients are locally sourced (and sourced based on availability). For example, the apple butter dollops that garnish the plate for the pork chop special comes from North Carolina grown apples.

The bed of kale beneath the braised duck confit special is as local as it gets coming from Brunswick County, Hunn said.

“We’ll find something different and it’ll sell like fire and we will be out the first day — but that’s alright, we like that. We like producing small-batch stuff, nothing that we’re making in this kitchen at this point is using premade ingredients,” Sena said.

And for those who might be craving something sweet, Hunn doesn’t stop with entrees, scratch-made cheesecake is available for dessert, but like everything else, when it’s gone it might be some time before it’s back.

Rumcow is located on Grace Street between Front and 2nd streets. Their menu can be found online, and the weekly specials are frequently posted on the restaurant’s Facebook page.