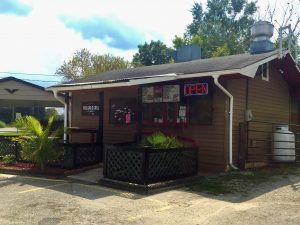 LELAND — On the corner of Lanvale Road and Old Fayetteville Road, you can find a fried bologna sandwich. Some will tell you it doesn’t get much more southern than that.

The building for Five Girls Grill was built in 1973, and it has hosted several restaurants throughout the years. There is a higher volume of traffic in that intersection partly due to the location of two schools: North Brunswick High School and Leland Middle School, which are just two miles east on Old Fayetteville Road. Highway 74 is 1.5 miles to the north.

Even though it is a busier intersection, the Jones family did not let that deter them from beginning their plan.

“We had been talking about (starting a restaurant) for a while, and this location was open,” said William Jones, one of the partners for Five Girls Grill. “It was in a busy intersection, so we felt like business would be pretty strong. So, we put our plans in motion, and here we are.”

When the Jones family was trying to decide on a business name, Jones said his son suggested Five Girls Grill since there are five girls in the family.

Outside of school hours, customers can usually see the family working together behind the counter, taking orders, engaging with customers and preparing food.

When school is in session, Jones said they have other employees to help run the business.

What’s on the menu? 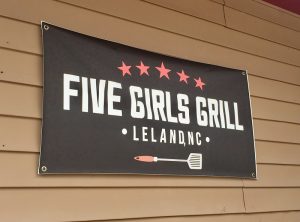 Jones said some of Five Girls Grill’s recipes are family recipes, but other items on the menu come from his times on the road as a truck driver.

“When I first started (driving trucks), I used to haul long distance, so I was up north a lot — Midwest, Texas, California — so I’ve sampled a lot of flavors of food from different backgrounds,” he said.

Five Girls Grill has a breakfast menu in addition to the regular menu that includes items such as an egg and cheese sandwich, fresh sausage dog, and smoked sausage dog.

“We picked a menu that pretty much anyone could find something they liked on there,” Jones said.

For those who may not want heavier or unhealthier foods, Jones said they also have foods “that appeal to a healthier choice” including turkey wraps, turkey and ham subs, and grilled chicken salads.

“We give people the feeling of home,” Jones said. “We engage every customer.”

He said one thing he loves about running his own business is the freedom “to do things your way.”

“We try to accommodate the order specifically to what someone wants,” he said. “If someone wants to come in and get onion rings like loaded fries with chili and cheese and bacon on it, we’ll do that. You can customize your order here.”

“The reception by the community has been great,” Jones said. “They’ve supported us.”

Jones said they would like to expand the business in the future. Currently, Five Girls Grill has outdoor seating under a shelter, but based on customer feedback, Jones said they want to look into locations that have indoor seating.

He said they ultimately would like to get into Wilmington due to a higher diversity in kinds of restaurants, but they are open to having another Leland location.