WILMINGTON — Dr. James Rickie Holliday, the former deputy superintendent of New Hanover County Schools, filed his response to a civil suit against him, the current administration, and the board of education.

The lawsuit cites the unequivocal guilty plea of Kelly, as well as the statement of Assistant District Attorney Connie Jordan, who told the court during the plea hearing that Kelly told investigators he had been investigated by NHCS for sexual misconduct and cleared — but that law enforcement had not been contacted. The lawsuit any cites the statements of parents, students, and teachers who made similar allegations that complaints about Kelly — and others — were ignored or silenced.

Holliday retired just a week after Jordan’s statement in court, amid increasing scrutiny of his role in supervising Kelly and the launch of an investigation by the North Carolina State Bureau of Investigation.

Holliday’s response, filed by attorney Katie Weaver Hartzog of the Cary-based Hartzog law firm, comes separately from that of current administrators and the board, who are being represented by Raleigh-based law firm Tharrington Smith. According to court records, a response from Tharrington Smith is expected by the beginning of November, unless an extension is granted. 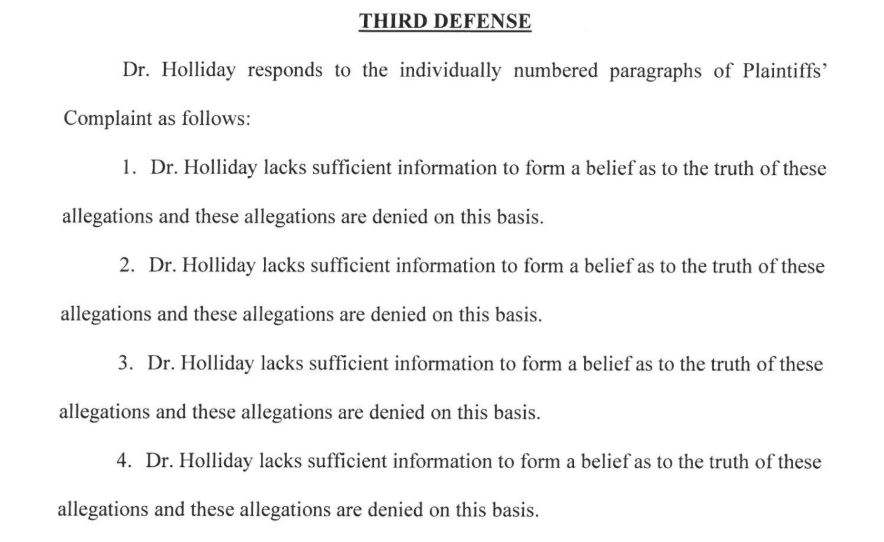 In his response, Dr. Holliday first denies any knowledge of Kelly’s sexual inappropriate behavior and any related failure to fulfill his legal duty to report such behavior.

In the pages that follow, Holliday’s filing provides few details, but it does specifically deny that he had any role in supervising Kelly during his tenure at IBECHS.

Holliday also declines to respond to any accusations about Richard Priode, a former Laney band director; several allegations were made against Priode between 1998 and 2001 while Holliday was principal. Priode left the district and was eventually arrested for having a sexual relationship with a student while he was a teacher in Charlotte. Holliday cited state statute §115C-319 and §115C-321, which make personnel records confidential.

Related: Former students, parents say they reported teacher misconduct to Holliday, board members, up to 20 years ago

Holliday denies allegations that Caroline Kuebler brought Kelly’s questionable behavior to his attention in 2003. Kuebler, who first spoke to WECT in February of 2018, shortly after Kelly was arrested, says she repeatedly attempted to discuss the issue with Kelly and Holliday before filing a formal complaint — however, the complaint mentioned only Kelly’s alleged retaliation, by unfairly docking a grade, against child, and didn’t mention sexual misconduct.

The school district stated it only kept complaints from the following year (the 2004-2005 school year) and later on file. Holliday denied any recollection of the event, stating categorically that Kuebler never contacted him; he has since declined to comment on the issue.

In his filing, Holliday acknowledged Kuebler’s written complaint and denies it was ignored by the administration. He also denies he failed to keep a copy of Kuebler’s complaint, and further denies that no action was taken against Kelly. 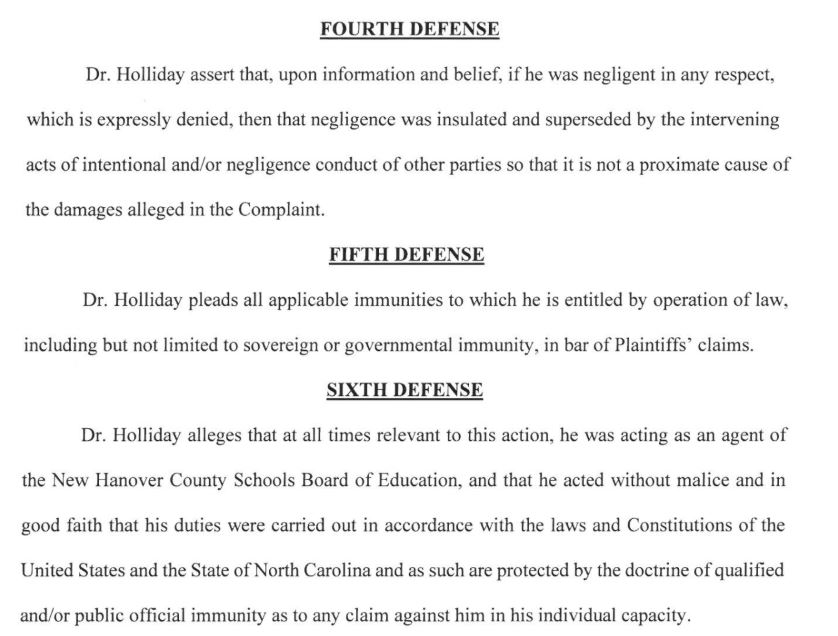 In closing, Holliday also argues that, “if he was negligent in any respect, which is expressly denied, then that negligence was insulated and superseded by the intervening acts of intentional and/or negligent conduct of other parties so that it is not a proximate cause of damages alleged in the complaint.”

Holliday also pleads to several variations on “immunity,” including but not limited to sovereign, governmental, and public official immunity. Sovereign immunity typically refers to the state and its departments (e.g. NCDOT, DEQ, etc.), whereas governmental immunity typically refers to local government. Public official immunity is a complicated category, based in part on case law; in general, the law seems to grants immunity to administrators (principals and assistant principals, superintendents) but not to teachers, according to the University of North Carolina School of Government.

Holliday asks for the claims against him to be dismissed, for a jury trial on issues of fact, and for legal fees to be assessed against the Plaintiffs.