Florence reclassified to hurricane, strengthening and expected to hit southeastern coast by Thursday

Florence is expected to become a major hurricane by Monday afternoon. 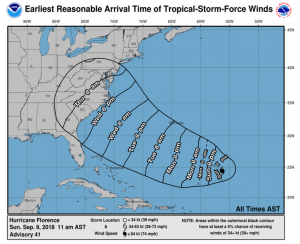 Editor’s note: All of our hurricane and public safety articles are free to access with or without a subscription.

“The NOAA Hurricane Hunters just flew through the eye, finding 70 knot winds at flight-level,” indicating that Florence has become a hurricane again. The aircraft located the hurricane’s center at latitude 24.4 North, longitude 56.3 west, approximately 1,500 miles southeast of the Atlantic coast and 750 miles from Bermuda, moving west and expected to continue moving west at 6 mph through Sunday.

A west-northwestward motion with increasing speed is expected by Monday, and that motion is forecast to continue through mid-week. The hurricane’s eye is expected to move over the southwestern Atlantic Ocean between Bermuda and the Bahamas Tuesday and Wednesday, and will “approach the southeastern U.S. coast on Thursday.”

According to the center’s discussion report issued Sunday morning, “All indications are that Florence will be an extremely dangerous Category 4 hurricane while it moves over the western Atlantic toward the southeastern United States.”

WILMINGTON — Tropical Storm Florence (formerly Hurricane Florence) is expected to intensify over the next few days as it approaches the East Coast, and the National Hurricane Center’s current storm track has the Cape Fear Region in the cone on uncertainty – the storm’s potential track.

According to the 5 a.m. update on the storm, “Florence is forecast to be a dangerous major hurricane near the southeast U.S. coast by late this week, and the risk of direct impacts continues to increase. However, given the uncertainty in track and intensity forecasts at those time ranges, it’s too soon to determine the exact timing, location, and magnitude of those impacts. Interests along the U.S. East Coast, particularly from north Florida through North Carolina, should closely monitor the progress of Florence, ensure they have their hurricane plan in place, and follow any advice given by local officials.”

Florence is expected to intensify over the next 12-36 hours likely becoming a major hurricane by Monday afternoon.

Port City Daily will continue to monitor the storm as it approaches, and all hurricane coverage will be free to access and will not count toward free monthly reads.

Check back throughout the week as well as on social media for storm updates.

1898 teachings in NHCS part of revised education standard on revolution, reform and resistance