NOAA calls for above average active Hurricane Season in the Atlantic 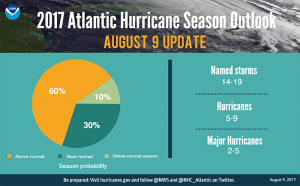 SOUTHEAST NORTH CAROLINA – Get your hurricane preparedness kits ready. According to the National Oceanic and Atmospheric Administration, the region could see more than 20 tropical storms and hurricanes this season.

Officials say it’s shaping up to be an “above-normal season,” and it could be the most active since 2010.

“We’re now entering the peak of the season when the bulk of the storms usually form,” said Gerry Bell, Ph.D., lead seasonal hurricane forecaster at NOAA’s Climate Prediction Center, in a news release.

“The wind and air patterns in the area of the tropical Atlantic and Caribbean where many storms develop are very conducive to an above-normal season. This is in part because the chance of an El Niño forming, which tends to prevent storms from strengthening, has dropped significantly from May,” he added.

According to Steve Pfaff, warning coordination meteorologist with the National Weather Service in Wilmington, the early start to the hurricane season, and above normal temperatures in the tropics combined with a less active El Niño pattern also indicate the possibility of an active season.

According to the release, there’s a 60 percent chance that Cape Fear residents will see an above-normal season with 14 to 19 tropical storms and five to nine hurricanes. Of those hurricanes, between two and five are predicted to be major.

According to Pfaff, during the typical Atlantic Hurricane Season, which runs from June 1 to Nov. 30, we see around 12 named storms. Six of those storms go on to become hurricanes, with three reaching major hurricane status.

This year, NOAA predicted 11 to 17 named storms, but with the latest update, that has risen to 14 to 19 instead.

“Now these aren’t impact forecasts, they’re purely the number of predicted storms,” Pfaff said. “But regardless of what the forecast is, locally, we have to stay vigilant and prepared, just because of our history.

“We’ve had Hazels, the Frans, and the Floyds, so regardless of what that forecast is, we can’t let our guard down.”

“Today’s updated outlook underscores the need for everyone to know their true vulnerabilities to storms and storm surge. As we enter the height of hurricane season, it’s important for everyone to know who issues evacuation orders in their community, heed the warnings, update their insurance and have a preparedness plan.”

The storm projection is based on atmospheric and oceanic conditions, the most recent model predictions and pre-and early-season storm activity.

Pfaff noted that peak season isn’t until Sept. 10, but as we head closer, he urges Cape Fear residents to make sure they have their hurricane preparedness plans in place.

Get the latest forecast from NOAA at nhc.noaa.gov.

Share
Facebook
Twitter
Email
Print
Previous article
A cure for the late-night munchies: 5 more restaurants for night owls
Next article
Advice from an eye doctor on viewing the eclipse safely