Clash with a Titan: one year after grassroot activists stopped a concrete plant, they revisit the past while looking to the future

CASTLE HAYNE — It has been a little more than a year since Titan America pulled out of a proposed concrete plant in northern New Hanover County. Now, members of the Stop Titan Action Network that protested Titan’s plans are looking back at the fight, and ahead to future issues.

In 2008, the New Hanover County Board of Commissioners voted to offer $4 million in incentives to the Virginia-based company. Roanoke Cement, a division of Titan America, took the deal and proposed a $450 million dollar renovation and expansion of the Ideal Concrete facility in Castle Hayne. The plan gave residents just three days to review the plans; those three days kicked off eight years of public protest, lead by the Stop Titan Action Network, a umbrella group for local environmentalists that argued the plant would have a serious negative impact on the region.

The process grew acrimonious, with lawsuits filed by both sides, including one against Kayne Darrell, the leader of the local community group Citizens Against Titan.

The suit was eventually settled and – in the end – Titan USA decided to pull the plug on the project, ignoring the near-decade of environmental protest and citing economic concerns instead.

One year later, the ruins of the Ideal Concrete plant crumble slowly in disuse. Signs posted by Titan America show the wear and tear of time.

After Stop Titan, local groups look back – and forward

Now, Darrell and other members of the Stop Titan Action Network are convening to revisit the eight-year battle. Organized by Yuna Shin, a professor at Cape Fear Community College, the event is called “The Story Of How Ordinary Citizens Stopped A Corporate Titan.” Shin said she hopes the event will have a good balance of reflecting on the past and looking to the future.

Kemp Burdette, executive director of the Cape Fear River Watch, said he will speak at the event to “reflect back” on the last decade.

“I want to tell the story of how it happened,” Burdette said. “It’s the story of how a community can oppose a project like this, and also about what we learned. There are things that a non-profit can do, things an individual can do, and those lessons were important.”

For Darrell, the story of the Titan’s project is valuable in and of itself, but also preparation for the future.

“Unfortunately there’s always a next battle,” Darrell said. “Looking back, we have a great story to tell. But we hope that the story will inspire others, in their own communities. We hope the story lets people know, no matter what, you can beat the billion dollar corporations.” 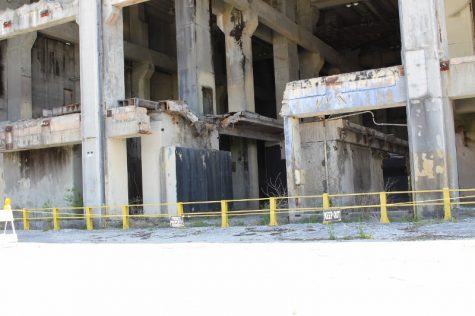 Darrell added that upcoming industrial developments in New Hanover County will require vigilance to “achieve a balance between special interests and the actual residents.”

Also speaking at the event with be former Wilmington Mayor Harper Peterson, who will discuss recent changes to New Hanover County’s Special Use Permit and Unified Development Ordinance may affect upcoming industrial projects.

CFCC will host “The Story Of How Ordinary Citizens Stopped A Corporate Titan” on Tuesday, April 18, from 6 – 8 p.m. at the Union Station Building, 502 N. Front St.

Share
Facebook
Twitter
Email
Print
Previous articleUPDATE: Atlantic storm upgraded, named Arlene, but still no threat to coast
Next articleTo save Masonboro Island, this group is taking a whole generation to experience what it offers