NEW HANOVER COUNTY — According to the New Hanover County Sheriff’s Office, a double homicide early Saturday morning left two victims dead and one transported to the hospital with a gunshot wound to the chest.

Sheriff’s deputies were dispatched to 6708 Providence Rd. at 5:40 a.m Saturday after a female called 9-1-1 from inside the home. Upon arrival, police secured the home before removing the homeowner, who was not injured, and transporting the injured female to the hospital to seek treatment.

According to early reports from WWAY, George Taylor III is listed on the tax records for the property. Taylor is the chief operating officer of TRU Colors Brewing, a local brewery that employs active gang members, often rivals (TRU stands for “truth, responsibility and unity” according to the website). The brewery works toward ending street violence by teaching business and life skills that create positive opportunities for gang members.

Tyson has made headlines over the last decade for being arrested multiple times between 2009 and 2019. In 2018, US Marshals detained Tyson in Pender County for assaulting a woman with a firearm and shooting into a residence. Though he received multiple other charges, most were dropped and Tyson served a 25-day sentence.

He was arrested again in 2019 in connection to the shooting of a 19-year-old on Red Cross Street. Though Tyson didn’t shoot the victim, he did open fire near a home TRU Colors Brewing founder George Taylor owned on Red Cross (earlier in 2021, the brewery moved operations into the Century Mills building on Greenfield Street).

No information has been released as to whether Tyson worked for the brewery.

Have tips of info? Email info@portcitydaily.com 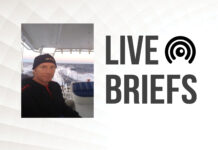