The decision comes as the delta variant accounts for over 80% of all Covid-19 cases in the U.S. The variant is two-and-a-half times more contagious, even for ages 50 and younger, according to Yale Medicine, and infects at a faster rate. The CDC says, though rare, its strength also puts vaccinated people at risk for breakthrough cases — those who contract the virus even after being vaccinated. As well, the variant could increase the chances of vaccinated individuals being carriers and transmitting Covid-19 unknowingly, even without symptoms.

“This new science is worrisome and unfortunately warrants an update to our recommendation,” CDC’s director, Dr. Rochelle Walensky, said at a news conference Tuesday.

Covid-19 cases have been on the rise across the U.S. recently, averaging 57,000 a day and 24,000 Covid hospitalizations. In North Carolina, the case positivity rate has risen to February numbers, 10.4% (health officials prefer to see 5% or lower, which the state was falling under up until a few weeks ago); hospitalizations are above 1,000 for the first time in two months.

The CDC is reporting 35% of counties nationwide are showing high levels of Covid-19 transmission. Pender County is at 14.41% percent positivity, and has moved into the orange zone on the Covid-19 County Alert Map, which means the region has substantial spread of the virus.

Gov. Roy Cooper announced last week he planned to let the statewide mask mandate expire on July 30. He also recommended schools K-8 require masks in the upcoming school year, though stated it would be up to the districts across 100 counties to make those decisions.

In southeastern North Carolina, Pender County Schools already made the decision to go mask-optional. Brunswick County Schools is asking for feedback to inform which route it will take on masks. New Hanover County Schools will move forward by following the StrongSchoolsNC toolkit recommendations.

Mary Scott Winstead, spokesperson from the governor’s office, released the following statement after the CDC’s reverse on masks indoors:

“The more contagious Delta variant that is spreading almost entirely among unvaccinated people is concerning. The COVID-19 vaccines remain safe and effective in combatting this virus, and they are the best weapon we have to fight the Delta variant or other strains. Most all of the people getting sick and dying now are unvaccinated and that is why the Governor is pulling out all the stops to get as many people as possible to get their shots. The Governor and state health officials will review changes to CDC guidance and he strongly encourages schools and businesses to enact important safety precautions and unvaccinated people to wear masks until they get their shots.”

Governor Cooper is expected to give another news briefing about Covid-19 on Thursday, July 29, 3 p.m. (the conference originally was advertised for Wednesday, but was changed).

Senator Thom Tillis also spoke out today, according to Raleigh’s ABC 11, upon the CDC’s mask reversal. Tillis expressed worry that it may cause greater vaccine hesitancy in those who have not received a shot.

“I am deeply concerned that the Biden administration’s contradictory decision will cause even more vaccine hesitancy, giving many Americans the false impression that the vaccines are not as effective as they were originally told,” Tills expressed. “The data shows that fully vaccinated Americans are at a very low risk of a breakthrough infection and are at an incredibly low risk of serious complications. The promise of the vaccine was to protect Americans from the worst outcomes and allow them to return to life as normal. Now many local and state governments across the nation are bound to reimplement restrictions and mask mandates, even for Americans who are fully vaccinated.”

In North Carolina, 60% of the population has received at least one shot; 57% received two. Studies have shown Moderna and Pfizer are in the 80 percentile range of efficacy against the delta variant (versus 93% against the alpha). Johnson & Johnson revealed last month the vaccination works against the variants. Though, a new study — which hasn’t been peer reviewed — found it could be less effective. 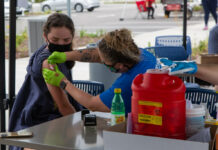