WILMINGTON — Tales of undefinable objects that appear in the sky existed in the public consciousness long before the term “flying saucer” emerged in 1947.

The modern idea of unidentified flying objects comes from the folklore and history of the mid-20th century, while accounts of similar phenomena date back at least hundreds of years.

Diana Pasulka is a professor of religious studies at the University of North Carolina at Wilmington. Her research on UFOs is highlighted in a recent Showtime documentary and in national media accounts. She’s involved as an observer, and also in conversations with decision makers.

She was finishing writing a book on the Catholic doctrine of purgatory in 2012, and certain memories from the research stuck with her.

She was intrigued by accounts from centuries-old European Catholic sources that claim sightings of atypical objects, like orbs of light or spinning suns. Her research now focuses on the phenomenon as a case study in contemporary religion, the effects belief has on people, and the relationship between a technological society and UFO adoration.

The government increased interest in recent years, prompted by its own agents leaking eyebrow-raising disclosures to the New York Times. The Pentagon had operated a secret UFO study program in the 21st century, the paper reported in December 2017. And there was verified military footage released of supposed objects soaring near American fighter jets. The videos are displayed on grainy monitors but show unpredictable movements of different objects at rapid speeds.

The United States government took different stances on the phenomena over the years. After radar blips popped up over White House air space a few times in 1952, and jets were scrambled, an investigative effort was set up. Project Bluebook, tasked with studying the phenomenon, offered little insight by the time it was shuttered in 1969.

With a wave of new information, the government caved, added legitimacy to the UFO discussion and reframed the debate. The disclosures suggested the government was not questioning the existence of UFOs –– that’s already settled. The real question seemed to be: What are the objects and why are they engaging with military aircraft?

Pasulka received a call from the two New York Times reporters then at work on the upcoming UFO bombshell story in 2017. By that point, she was a well-connected presence in certain UFO circles. Her level-headed, academic approach was welcomed in a scene that attracts strong opinions and existential disagreements.

This year she was featured in “UFO,” a recent Showtime documentary series that interviews major players in modern UFO politics and examines the different influences on how intelligence on unexplained phenomena makes its way to the public.

Removed from the quest to determine what the objects are, her research focuses on belief in UFOs, and the effects of belief on individuals and communities. She supports efforts to normalize UFO discussions. Pilots and astronauts, Pasulka said, have been discouraged in previous years from publicly discussing weird things that happened while in the sky.

“However, there was a huge culture of people who believed in them, but didn’t talk about them,” Pasulka said in an interview. “That’s why I call it the Fight Club, because ‘the first rule of Fight Club is don’t talk about Fight Club.’”

The buzz –– undoubtedly dampened by the pandemic –– surrounding this year’s UFO report, released June 25, added to the momentum of the 2017 New York Times story and afforded the topic more seriousness.

Of the 144 events examined internally for the public report, only one was given a diagnosis: a deflating balloon. All the rest were left unidentified. In the report, the Office of the Director of National Intelligence said the phenomena “clearly pose a safety of flight issue and may pose a challenge to U.S. national security.”

“Some [unidentified aerial phenomena] appeared to remain stationary in winds aloft, move against the wind, maneuver abruptly, or move at considerable speed, without discernible means of propulsion. In a small number of cases, military aircraft systems processed radio frequency (RF) energy associated with UAP sightings,” according to the report.

Pasulka said she knows plenty of the characters involved in these recent updates. It’s a tight-lipped world — government sources with sensitive information, and anonymous scientists looking to make breakthroughs in long-ignored fields.

“I think it’s good that the government says, ‘We don’t know what they are,’” Pasulka said. “They do though, now, suggest they’re a threat, whereas before they didn’t.”

While working toward a Ph.D at Duke University, Brenda Denzler discovered the UFO community.

“I’d been looking for some segment of the American society that it would be interesting to follow across the change in the millennium,” Denzler said. “And I thought, ‘This is it.’”

In the 1990s she observed gatherings of UFO believers and asked about their quest to obtain “disclosure” of secrets from the government.

“They had this expectation that the end of UFO secrecy will come, and it’s coming soon,” she said. “Eventually all of this gelled into my dissertation topic, which is not how it started out.”

Denzler eventually retired from UFO culture study after writing a book on the topic, “The Lure of The Edge.” She also learned that another academic, Pasulka, had entered her circles and was doing rare work in the field. When Denzler downsized her personal library, she contacted Pasulka to offer a collection of UFO-related materials. They hadn’t met before, but the offer came while Pasulka was working on her book, “American Cosmic.”

“Back when it began, I just don’t think there’s any way it could have been some kind of foreign military power,” Denzler said. “At this particular point in our history, with our technological developments we’ve got now, 70 years on, I am more willing to consider that it could be.”

One route to be further explored, Pasulka said, is the possibility that the entities are displaying terrestrial processes still beyond the grasp of understanding.

“So we do know that time is of another dimension. We don’t fully understand it. We do know, based on the research of people like Einstein, that we have an illusion that time is linear — well, it’s not,” Pasulka said. “So there are other dimensions that can impact our own and influence our own and even dictate our own reality, and we’re not aware of those. So it could be something that is an inter-dimensional breakthrough, or something like that.”

Not long before the 2017 New York Times story, a unique object, estimated to be less than 5,000-feet long, was detected on a Hawaii telescope. ‘Oumuamua, Hawaiian for “scout” or “messenger,” was reportedly the first observed entity to enter the solar system from outside the sun’s orbit.

The scientific mainstream said it’s most likely a brand of space rock, but Harvard astronomer Avi Loeb considered that a rush to judgement. Loeb, who eventually wrote a book called “Extraterrestrial,” thought the unusual features of ‘Oumuamua made it unlikely the favored identification would withstand scrutiny.

Loeb was later funded by an anonymous billionaire UFO enthusiast, Pasulka said, who supports the astronomer’s work. The money is for the Galileo Project, Loeb’s initiative to search for more phenomena through a global network of monitoring tools like telescopes.

“I won’t say it because I don’t know,” Pasulka said. “But I’m pretty certain I know who it is. And this is someone who is fascinated with UFOs, but has not ever come out himself and talked about them.”

A source in Pasulka’s book, an actual scientist given the pseudonym “James,” is part of an anonymous contingent of researchers, dedicated to the study but wary of attaching their names and reputations.

James is a researcher at a “top-five university,” Pasulka said. There’s a scene in her book where James accompanies her to a meeting with a source in the New Mexico desert, where they’re led blindfolded to a site allegedly containing unusual debris. Pasulka said they found materials, and James took some back to his lab to perform a molecular analysis.

“He explained that what he found could not have been created in the universe as he knows it,” Pasulka said. “It was just inexplicable to him.”

It’s a possibility, according to the report, that there are multiple types of these objects “requiring different explanations.” It’s also stated nothing suggests they’re the work of a foreign adversary.

Pasulka remained mum on whether she knew of any plan to release UFO information in a coordinated way. She finds it encouraging that fighter pilots are now speaking freely about their experiences on platforms like “60 Minutes,” something that could make the talk more respectable. 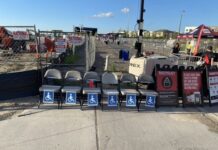 ‘Come one, come some.’ Riverfront Park presented obstacles for people with disabilities in first concert season