NEW HANOVER COUNTY — The state’s top health official acknowledged that mega vaccine events were partially to blame for as many as 18 counties receiving no vaccines last week, in a Jan. 26 letter to vaccine providers.

New Hanover County was told to expect at least 300 units weekly for first doses for the immediate future, though public health has the capacity to administer thousands of doses weekly, according to a spokesperson.

Last week, at least 39,000 doses were routed to Mecklenburg County, many of them for “two huge events at Charlotte Motor Speedway and the Panthers Stadium,” according to a spokesperson for the N.C. Department of Health and Human Services. Mecklenburg County — while accounting for approximately 10% of N.C.’s total population and 11% of the state’s total Covid-19 infections — received more than 25% of last week’s statewide vaccine allocation, according to vaccine distribution totals obtained by Port City Daily.

Health and Human Services Secretary Mandy Cohen acknowledged the “mega vaccine event” was partially to blame for previous reductions in vaccine supply for other providers.

“As you know, we faced a new pressure when the federal government indicated that they might reduce this coming week’s allocations to states who have larger amounts of unused supply on hand,” she wrote. “We had to make difficult allocation decisions in order to clear our backlog of first doses and provide strong proof that North Carolina can exhaust our weekly first dose allotments and give vaccinations quickly.”

Cohen acknowledged many counties have taken issue with the allocation process.

“I know that the allocation process moving into this week has caused some of you pain and frustration,” she wrote. “That was not our intention.”

The state needed to clear a backlog, she wrote, and mega sites allowed for a highly efficient shot-to-arm funnel. The decision left many providers with zero or no vaccines last week, but the goal was “to further avoid a potential reduction in federal vaccine distribution.”

Starting this week, approximately 90,000 of N.C.’s doses are being allocated weekly to counties evenly according to population. Remaining doses — between 37,000 and 55,000 per week — will be sent to counties with large senior citizen populations, large populations of historically marginalized communities and those that received little or no vaccine in previous weeks. The states says around 99.8% of vaccines sent to counties have been administered. In New Hanover County, the health department and hospital are the two most prolific providers, while MedNorth, a federally qualified health center, received 300 direct doses as well.

New Hanover County received an additional 700 doses from the state this week, on top of its 300-dose baseline amount. Half will be deployed for community outreach events and 500 are being filled by appointments.

“Trying to get 120,000 doses or so across the state of 100 counties is difficult without spreading it pretty thin,” said David Howard, interim health director for New Hanover County. “We’ve received a healthy supply of vaccines to date, and so we’re in a good place. We’ve let them know that we can absolutely handle a great number more than 300 so we’ll see if they adjust us up in the future.”

Partnerships between health departments and healthcare companies continue to organize large vaccination events across the state. According to an internal email from Michael Sprayberry, N.C. director of emergency management, many are slated for this week.

Among the largest, Vidant Health and local health departments are spearheading vaccinations at the Greenville Convention Center with more than 6,000 extra doses dedicated to the effort. In Mecklenburg, Novant Health was given 4,200 doses for a local event at a church. Guilford County and Cone Health have 5,775 extra doses for Greensboro Coliseum vaccinations. In Durham, the health department and Duke Hospital have 4,600 extra doses to work from for a large-scale event on the Fidelity Investments corporate campus.

“Patients from South Carolina and many other counties around Mecklenburg County come into Charlotte, so we think of these as regions even if they kind of are allocating vaccines based on populations in counties,” said David Priest, an infectious disease specialist for Novant Health, at a press conference. “We’ve reminded the state that when you’re a healthcare system like Novant, a particular facility we have in a county really serves a region.”

Other medical professionals argue that the emphasis on large-scale events has left providers of underserved populations without the necessary resources. M. Kent Locklear is the chief medical officer at Wilmington’s Cape Fear Clinic, which campaigned intensely in the fall and winter for the ability to administer vaccinations.

“They’re taking the path of least resistance,” he said, referencing the state’s plan, “instead of doing some of the harder work it would take to equitably distribute vaccines effectively across the state.”

Months ago, Cape Fear Clinic started the process of registering with the state to administer vaccines. Eventually, he said, the clinic hopes to receive doses directly from the state’s distribution channels, but at this point the clinic receives at most only a small portion of New Hanover County’s weekly shipment.

“Not until that capacity is closed to being maxed out, I wouldn’t expect a large-scale adding of new providers,” Howard said. “What they’re doing is being intentional about balancing their provision of vaccines to providers who are able to take care of a wide array of community members, to ensure both volume and speed, but also equity and delivery of the vaccines to the community.”

At New Hanover Regional Medical Center, there has been an ongoing initiative to vaccinate community members at The Pointe 14 Cinemas.

“We knew we needed more space than what we had here on campus, and so we started looking externally at some options on where we could do that,” said Mike Melroy, NHRMC’s pharmacy director.

Melroy added that while NHRMC does not have the capacity to vaccinate nearly 20,000 individuals in events like those in Charlotte, the movie-theater operation has made it clear the hospital can get shots into arms at a quick pace.

“We don’t want to have inventory in our freezers,” he said. “They are looking to make sure that when they send someone 1,950 doses, for example, that they can get those into arms safely and efficiently.”

In addition to its baseline allocation of 1,950 first doses, the hospital received an additional 700 doses this week that will fuel operations at the Pointe and elsewhere.

If you want to read more from Port City Daily, subscribe now and then sign up for our newsletter, Wilmington Wire, and get the headlines delivered to your inbox every morning. 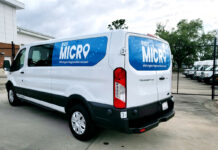