LELAND –– Allison Dunlap is running for a spot on Leland Town Council. This is the registered Republican’s first run for town office.

Port City Daily has sent a questionnaire to every candidate running in municipal elections, which are nonpartisan, and has dropped its paywall on the profiles to help voters make informed decisions ahead of the 2021 election year. (Though, your support of local, independent journalism is appreciated through a monthly subscription. Also, consider signing up for Port City Daily’s free newsletter, Wilmington Wire, to get the headlines delivered to your inbox every morning.)

Dunlap’s stance on local issues are discussed below. Port City Daily has included all responses in full, and only edited responses for grammatical and spelling errors.

READ MORE: Catch up on all political coverage

Port City Daily (PCD): What town services would you like to see introduced, expanded, or revised?
Allison Dunlap (AD): I believe, along with many Leland residents, that we need to focus on the fundamentals — our roads, our infrastructure, lowering taxes, and getting rid of an additional $30 municipal vehicle tax. Let’s put the Leland residents first instead of being hyper-focused on growing and expanding.

PCD: What’s one decision town council recently got right? What’s one decision they got wrong?
AD: I have seen a lot of improvements on the website that offer more transparency. At a time when many constituents are wary of the government, transparency is something that every resident can be thankful for. As far as something they got wrong — taxes. In a single year we had benefits cut (recycling), our property taxes went up and we had an additional $30 municipal vehicle tax added.

PCD: How can Leland foster smart growth and development? What specifically should be improved or is already successful in your opinion?
AD: I’ll be honest: I don’t like the term “smart growth” because it’s a catchy term that is used to sound good but in fact is attached to ideology that I do not agree with. I do not agree with condensing people into smaller places and government control over people with the strings that are attached to terms such as “smart growth,” “sustainable development” and other key phrases. These are terms attached to NGOs and are a Trojan horse for government control and every citizen should look into where this stems from. Leland has already had success in implementing “smart growth” as seen in the Leland 2020 plan and now looking toward the Leland 2045 plan.

PCD: When did you first move to Leland? Do you think there’s a division between so-called “old Leland” and “new Leland,” and if so how would you appeal to both factions?
AD: I moved from Wilmington to Leland in 2016 because Wilmington became too crowded for us. I didn’t know about the division of “old Leland” (I’m going to honor them and call them “original Leland”) and “new Leland” until not too long ago.  I actually spend a lot of time speaking with people from that area. I sympathize with them, and I can understand their frustration if they feel new Leland is getting the money. We can mend that relationship and we should. To me it’s as simple as putting ALL the Leland residents on the top of the priority list. If Leland would put the residents first, fruit would come out of that.

PCD: The utility merger with H2GO arrived after a long and contentious battle. Are you in favor of the merger? Are you concerned about any of the dissent surrounding it, notably by developers, Brunswick County, and a local legislator?
AD: This is probably one of the most complicated subject matters out there. At the end of the day, I’ll tell you there are things that I like about the merger and things that I don’t. What I like is, I believe the H2Go water is a FAR better quality of drinking water. The Cape Fear River has forever chemicals in it that go beyond just Gen-X, even though the state deems it as “safe.”

What I don’t like about the merger is the “annexation into Leland” portion of the deal. I am not an expert on the contract but I wish there was a way for the residents of Brunswick County to have a choice on where they got their water and if they wanted H2Go water that didn’t come at the cost of having to annex into the town.

PCD: Are you in favor of the town’s use of financial incentives through the use of taxpayer dollars to offset a developer’s expense to fund on-site infrastructure improvements?
AD: No. The residents of Leland have enough burden already and we have maxed out infrastructure. The town should make sure that infrastructure is done fairly to begin with and make sure that they aren’t letting the burden fall on the backs of the people.

PCD: Finally, what does Leland need? How will you help the town get or achieve it?
AD: Leland needs to look out for the interests of all the residents here. A “Leland First” mentality. I’m not against developers or big businesses, but I would like to see more small local businesses being birthed here in Leland. I’m not against “sprawl” either, which is what the “smart growth” believers are against. Let areas have some acreage and not be piled up on each other and we should be helping those communities, like “original Leland,” flourish too. When I go into “original Leland,” it feels abandoned and forgotten, and that’s how the people feel too. None of our residents should feel like this; they don’t deserve that. They have been here for a long time and that area should be honored.

I also want to say that even in the “New Leland” there are many people who feel jaded towards our local government because they feel that the town caters to the developers and has tunnel vision on growth. 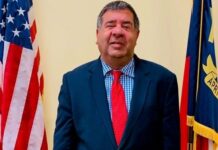