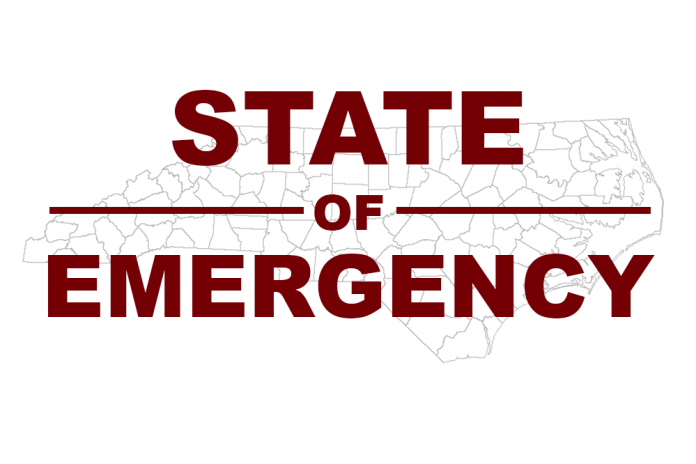 EASTERN NORTH CAROLINA — When Pender County declared a state of emergency at the end of March in response to Governor Roy Cooper’s stay-at-home order, it was the second-to-last county in eastern North Carolina — and one of the last in the state — to do so.

Only Robeson County has not yet declared a state of emergency among the region’s 41 total counties, as well as in the entire state, according to a spokesperson for the North Carolina Department of Health and Human Services.

On Wednesday Robeson County Manager Kelly Blue said no declaration was made because “we would have to do stricter guidelines,” according to a county clerk.

She said the county would “stay with what the governor is doing at this point” and noted officials had spoken to the county attorney.

Pender responds to ‘rumors and misinformation’

Thursday afternoon Pender County Health Director Carolyn Moser said there were still no reported cases of the novel coronavirus in the county. Of the 68 tests conducted — eight by the health department — 57 received negative results while 11 are pending, according to Moser. But she said the total number of tests conducted for county residents was unclear.

“We only know what tests are being completed, for the most part, in Pender County of Pender County residents,” Moser said. “We have a lot of people who go to New Hanover, Duplin, or Onslow to see their doctor, so we don’t really have a solid number.”

She said her health department was contacting private health providers in the county daily to update those numbers.

In an article posted to Pender’s website, the county responded to various “rumors and misinformation circulating in our community,” including one claiming the county was not prepared to respond to the crisis, and another claiming the health department “has no known Covid-19 cases because they only have 12 test kits.”

“The health department and providers in the county have test kits and are evaluating and testing those individuals who meet the established testing criteria,” the article stated, also noting that Moser’s department had been working closely with other departments, health providers, and the Pender Memorial Hospital to prevent the spread of the virus while following state and federal guidelines.

Meanwhile, neighboring counties have been seeing a rise in positive cases of Covid-19 in recent weeks: the latest confirmed totals show Onslow with nine cases (and one death); New Hanover with 42 cases (26 are 25- to 64-years old), and Brunswick with 23 cases. Inland neighbors — Columbus, Bladen, Sampson, and Duplin — have reported their first cases in recent days.

As of late Friday morning, there were 2,093 confirmed cases, 19 deaths, and 259 people hospitalized in 86 of the state’s 100 counties, although the state noted that specimens collected since March 27 “may not yet be reported.”

Reasons for no declaration

Many counties’ states of emergency were enacted to limit the number of people gathering in one spot, closing beach accesses, and requiring social distancing to reduce the risk of a Covid-19 spread.

Before and after Pender’s March 30 declaration, various attempts to contact Chairman George Brown were unsuccessful, but he issued a response Thursday evening through the county spokesperson.

“The majority of our board felt we were getting closer to declaring a state of emergency as the Coronavirus progressed across the state. We had our plans in place for weeks and we felt the team we had put together was moving in the direction we needed. The declaration of the state of emergency did not change our plans — our plans were already in motion,” Brown said.

When Governor Roy Cooper implemented a statewide stay-at-home order on March 30, Brown said commissioners felt it was important to “stay in step with the state and the governor” and issued a declaration to coincide with the governor’s order.

Last Wednesday, March 25, Moser said the chairman was the “one who has been receiving all of what, exactly, a state of emergency accomplishes.”

“He says that he’s not real clear — that the main thing a state of emergency does is allow you to set curfews and control liquor and gun sales,” Moser said.

But according to New Hanover County Emergency Director Steven Still, declaring a state of emergency gives local governments and health departments the authority to take protective measures for residents while also “signaling to the state and federal governments that financial support and resources are needed in response to an emergency event.”

“Gaining access to resources like supplies, equipment, and personnel give flexibility to local emergency management that would take valuable time in any other situation,” Still said.

But he also said the timing of a county’s declaration would not impact priority status for state and federal funding, a point backed up by state spokesperson Andrew Barksdale.

“Whether you’re the very last county to do it or the very first county, it does not make any difference on the amount of funding received,” Barksdale said.

Although he couldn’t provide an exact log of when each county declared a state of emergency in response to the Covid-19 crisis, he said that by March 30, “the majority of our counties had already declared.” He also said some counties like Pender with no confirmed cases did not declare as soon as others.

He did say that a state of emergency allows counties and the state to “cut through some red tape and … take emergency action.”

“It’s usually done when a hurricane is coming; it’s the first time for all of us really [to respond to a pandemic]. A lot of this is new, so how it’s impacting everything is very different.”

How declarations rolled out across the eastern region

Various waves of declarations rolled out across the state’s eastern Coastal Plains region in mid- to late-March. Beaufort was the first to declare, two days after Governor Cooper declared a state of emergency to activate the state’s Emergency Operations Center to, among other purposes, increase county health departments’ access to state funds.

“Our Health Director and EM staff activated our Health EOC on March 12 after consulting with the Health Department Epidemiology Team which had been meeting for the two weeks prior and monitoring the COVID-19 issue,” Beaufort County Manager Brian Alligood told Port City Daily.

The next day, Friday March 13, President Trump declared a national emergency; the following Monday, 11 counties in the region followed suit, according to data collected by Port City Daily.

Bertie County, which declared on March 17, said its state of emergency assisted emergency staff to “be in the best possible place to request any related funding, resources, and authority needed” to combat the threat of the virus, according to a release. Cumberland declared on March 16 without any confirmed cases.

Dare County’s reason for declaring, also on March 16, was to allow the county and individual towns to quickly implement restrictions necessary to fight the spread of the virus, according to OBX Today, a daily news outlet covering the Outer Banks area.

Harnett County said its March 16 declaration was a precautionary measure to “allow for expedited assistance from state and federal aid agencies should the need arise,” echoing numerous other counties reasoning a declaration opened up access to state and federal resources to respond to the pandemic while protecting the health of residents.

“County staff believe this declaration will assist our emergency personnel in obtaining any necessary equipment and supplies more quickly,” according to a Harnett County release.

Brunswick and Columbus declared on March 24, the 38th and 39th counties in the region to declare, while Pender declared on Monday, March 30.

“Pender County has carefully monitored the Coronavirus,” Brown said in a Monday release. “We are coordinating our efforts through our capable county health director, Carolyn Moser, and Carson Smith, our interim emergency manager.”

“The Stay at Home order is vital to mitigating the spread of COVID-19,” Moser added.