Food-truck park, work-space and apartments: an in-depth timeline of the ‘Cargo District’

WILMINGTON — Over the next two years the “Cargo District” at Queen and 16th streets will radically overhaul a mostly-abandoned block in downtown Wilmington. The development, spearheaded by Leslie Smith, will bring a series of shipping-container projects to the area.

When it’s done, the Cargo District will feature co-working spaces, a food-truck facility and apartments — all constructed from 20-foot and 40-foot shipping containers. The projects represent a partnership between Smith, owner and developer of the land, and Bryan Kristof, owner of Craftspace Design.

It might be an over-simplification to say that Smith is building the district while Kristof and his team are decorating it; it could be said that Craftspace is making sure Smith’s vision for the area gets translated into the details of various projects. That vision comes down to reusing and rejuvenating what the area has available, according to Smith.

Related story: A shipping container theater could be Wilmington’s new home for Shakespeare and more

“If you just bulldoze the neighborhood, there’s nothing left in terms of character. If you can take a building and do something new with it, that’s much better – in my eyes – than tearing it down and building a generic new building,” Smith said.

The use of shipping containers is an extension of that logic, Smith said. The development will ultimately use hundreds of shipping containers. Many of them were stranded at the Port of Wilmington after the Hanjin corporation went bankrupt, others will also come from local facilities that have no use for them. 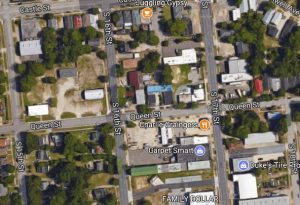 Smith added that each phase of the development will try to explore the philosophy of “up-cycling,” or re-using local materials and buildings while improving them.

The Coworx “microbrand” of Craftspace is a good example of the District’s aesthetic, according to Kristof.

“It’s all about find ways to re-appropriate what’s already in the neighborhood. Our mission was to reuse — our building is in an old fire house. Our shipping containers, or at least the majority of them, are from the area,” Kristof said.

The Coworx space has already attracted several clients, including SIS Digital. CEO Ty Downing said the company was moving from TekMountain because, “we wanted an exciting change of scenery to inspire not only our staff but our clients and work with SkyNav. We also wanted to be part of exciting expansion of creativity in Wilmington.”

Downing pointed out that, while the co-working space was attractive, it was longer-term development plans of the district that really convinced him on the move.

According to Kristof, the Coworx space will have a grand opening in September.

An extension of Coworx’s aesthetic, the “Live + Work” space is being designed by Rob Romero of Romero Architecture. The spaces will combine apartments with work-spaces. Ultimately, nine units will be built from 18 shipping containers.

According to Jacqueline Chase, marketing director for the development, construction on the Live + Work spaces will start in about two months, and will help meet the emerging demands for the region’s workforce, particularly in tech-sector jobs.

The units represent a crucial benchmark for the project as a whole, she said.

“We’ll be very excited when those come on line, we feel like when those are open the village will really be coming to life,” Chase said.

The first major project across the street on the main block of the Cargo District, the Food Truck Park will set the tone for rest of the District’s development. Kristof said he and Chase recently met with about 12 food-truck vendors to consider the requirements of the park.

“We’ll have water, electricity and gas hook-ups, which will make it much easier for the trucks to operate,” Kristof said. “We’ve also discussed setting up some more permanent locations in addition to trucks that want to rotate in and out of the park.”

There are also plans for a commissary kitchen on the premises – a valuable asset to food truck vendors, since the county’s health inspectors won’t allow certain kinds of cooking and food prep on a truck without separate sinks and other requirements.

Kristof said his team was reaching out to local businesses interested in operating a drive-through coffee shop and a bottle shop on in the park.

“I mean I suppose we could definitely get a Starbucks in there – and Starbucks has been doing locations with shipping containers – but that wouldn’t be the point. We’d way rather have someone local who’s passionate about this project, and I think we’ll find that,” Kristof said.

Kristof said he hopes to see the food truck infrastructure set up by the end of the year, with the park opening by Spring of 2018.

The final piece of the Cargo District will be the apartments.

Kristof said current plans call for between 50 and 70 apartments, using between 250 and 300 shipping containers. The apartments would be somewhere around 530 square feet.

“Inside they’d have insulation and be finished a bit more like traditional apartments,” Kristof said. “But we’d like to have a balcony area, flanked by the container doors, something to keep it true to the building materials.”

“We hoping to strike a chord, we want something that looks different, that feels new, and cool and innovative. We also wanted s omething that referenced the port and that part of Wilmington,” Kristoff said.

Kristoff, who moved to Wilmington 18 years ago, said he hopes the adventurous style of the development will attract residents to a neglected part of town. He said there were no concrete pricing plans set yet, but that apartments would likely rent for $1,000 to $1,500.

According to Kristoff, the apartments require about 20 percent less construction time compared to traditional builds, and are slated for completion by the end of 2018 or early 2019.

“Before 2020 – I can’t believe I’m saying this, but that’s really soon – we hope to be open. There’s been a development gap in this area, between the waterfront and midtown, and we don’t just want to fill it, but we want to do something unique here,” Kristof said.

Reactions to the project

There have not been any major development projects in the area of the Cargo District, and so it way initially unclear how residents would react to their new neighbors. So far, Smith said feedback from his neighbors had been largely positive.

“Any time you change a neighborhood, you expect some push back, but we’ve hard mostly good feedback. Five years ago, I was out here on the property picking up trash by myself, but I can see people are more invested in the area now,” Smith said. “You’re gentrifying a neighborhood, right? But there’s a way to do it that isn’t soulless, that uses the buildings that are there, that makes sense in that neighborhood.”

While Smith said he felt the Cargo District was a unique project, he also hopes other developers will be inspired by the project.

“I’d love to see more projects like this in our town. It’s not the lowest bidder kind of project, but it’s got something to it, something that could help really define a neighborhood and a city,” Smith said.

Share
Facebook
Twitter
Email
Print
Previous article
Sue Ellen Paschall, 86, took pride in being the matriarch of her family
Next article
Wilmington Boat Show set to return in September, promises to be ‘even bigger’

UNCW plans to tear down oldest dorm on campus