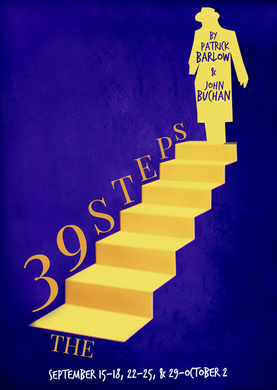 WILMINGTON – When the curtain pulls back this weekend at the Cape Fear Playhouse, the stage will fill with a plane crash, handcuffs, some missing fingers and a little bit of romance.

Big Dawg Productions presents “The 39 Steps,” a whodunit the theater production company promises to be a mix of “a Hitchcock masterpiece with a juicy spy novel (and) a dash of Monty Python.”

Written by by Patrick Barlow and John Buchan, and directed by Josh Bailey. The comedic adaptation of the 1915 novel and later Alfred Hitchcock film plays with just four actors, two of whom a play a majority of the script’s more than 150 characters.

“In ‘The 39 Steps,’ a man with a boring life meets a woman with a thick accent who says she’s a spy,” the play’s promotional material states. “When he takes her home, she is murdered. Soon, a mysterious organization called ‘The 39 Steps’ is hot on the man’s trail in a nationwide manhunt that climaxes in a death-defying finale.”

Performances begin Thursday, Sept. 15 and the show runs Thursdays to Sundays through Oct. 2.  Tickets are still available for all shows except Friday, Sept. 16. Show times are 8 p.m. Thursday through Saturday and 3 p.m. on Sunday.

Performances will be at the Cape Fear Playhouse, 613 Castle St., Wilmington. The theater is wheelchair accessible.

Tickets cost $20 for general admission and $18 for students, seniors and military. All Thursday performances are $15.

Order tickets by phone at 910-367-5237, by email at bigdawgpro@gmail.com or online through Brown Paper Tickets.

NHCS health science teachers speak out against deal with Novant